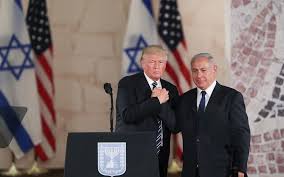 A Great Day for the World. President Trump Acknowledges that Jerusalem Is the Capitol of Israel

A great day. Trump has declared to the world: “I have determined that it is time to officially recognize Jerusalem as the capital of Israel. I am also directing the State Department to begin preparation to move the American Embassy from Tel Aviv to Jerusalem…”

This is highly symbolic for the World. It brings Godly consciousness back to center. I am not referring to any prophecy, the second coming or saying the Jewish people are the elect; it is not those things. The second coming already happened 1757 and we now live in the ‘church of the New Jerusalem’ as the Bible says. Jerusalem corresponds to heaven. The acknowledgement of Jerusalem as the capitol of Israel is a great return in mind and heart – for those who love God and justice-  to God and justice. Israel and the USA are the two nations that most lead the world in acting from a Good conscience. They do so because they are the nations that are most tethered to the Word from their origins, and also most committed in the present moment to God, strength and peace. It is a day to celebrate the bold step that has been taken toward common sense for the world, the restoration of justice, and that we have president who strives for the heart of truth in spite of the massive efforts to perpetuate deception and Godlessness.

Part One: How the Internal Wiring in the Psyche Was Lost When There Was the Great Separation Between God and Man Before Jesus Was Born

The Writings of Swedenborg Helped to Heal Many Distressed Minds and Those Disturbed by Crisis in History: The Example of August Strindberg and The Healing of Intellectual Pride and Fear of Demons