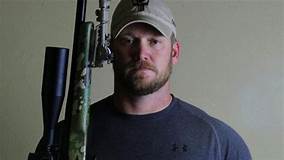 In American Sniper Clint Eastwood does a great service for our country. Near the end of the movie Chris Kyle is helping a former soldier learn to shoot better and they are bullshitting while having a productive time. The man misses a couple of shots and with a little guidance from Chris he then hits two in a row. He says to Chris, “Wow, I feel like I got my balls back”.
In this creative art form of film Clint Eastwood helps the country get its balls back – at least its a start. Clint’s position toward Obama is well known. It would seem it is no accident that the movie came out at the same time as the State of the Union address. As President Obama continues to seek an ounce of credibility – his speech stretching the truth, claiming credit for things, ignoring a hundreds of inconvenient truths – it is a stark contrast to a man who sees a problem and goes to do something about it. Chris was a man, like most Marines, who was willing to put his life on the line, and be the one to do the job of eradicating enemies and terrorists. Not many of us can do that.
American soldiers and their allies have an incredibly hard task; they have to protect and kill, while playing by the rules of decency, but the enemy usually has no such scruples. This takes an incredible amount of self-control and good judgement in the most intense situations. There is another dynamic American military men are working now. Recently an American general (speaking mostly of campaigns in Africa) said half the fight for the American soldiers now is to try to win the good will of enemy fighters who have nothing, and so they join insurgent groups. By winning hearts, they win the war. This takes spiritual strength.
In the movie Clint reveals another dynamic – the man whose beliefs are adrift and lost. In the movie one of Chris’s fellow soldiers begins to have a distant look about him. This man dies in battle, and a letter he wrote is read at the funeral in which he reveals he didn’t believe in what he is doing, he seemed to be wondering if he belonged and if they were doing the right thing. Chris tells his wife as she desperately questions him that his friend died because he lost his heart and gave in. This is a remarkable scene to depict and is a commentary on personal idealogy and its effect. Content of ideology aside, it shows that a soldier needs to believe in what he is doing, the goodness and purpose of it for His country. Chris’ belief is clear – he believes in God, country, and family. He is a protector, and his heart is in the right place.
Chris Kyle is not perfect. His struggles are magnified because of the intense decisions he has to make – at what to shoot in war, and between his family and his call to defeat evil men that he knows are causing havoc. He feels inside that he is best suited to do this, and he proves to be right. In the movie in the end, he loves God, his country, his wife, his family, and he finds use in his fellow soldiers who are struggling after the war. He channels his energy into helping others.
The movie shattered the box office record books because it strikes a deep cord in the American psyche and heart. The movie helps us look at our love priorities as Americans, – and as men and woman. It helps us to get our balls back.

The Concept of Equilibrium - An Esential Key to Understading the Bible, History, and the Cosmos