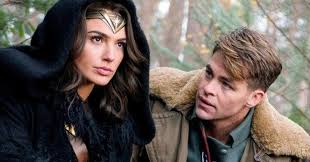 In watching Wonder Women again I have a few more interesting observations on the movie. In my previous article I wrote about how the movie has Biblical or Godly themes. Even in just saying that it is tricky in todays society to not turn people off by referring to God and the Bible (even though its right there!). The movie itself never mentions God for this very reason even though it expresses these themes in allegory with remarkable depth. For me personally my feeling about the Bible is that it is a treasure chest of wonder, sacred truth, full of meaning and joy – so I  embrace the Bible. I also pursue meaning wherever it leads. What I am really seeking to do in writing about super hero movies and great stories is to articulate what it is that moves us so much inside about them; its fascinating to examine what it is in these movies the move us so. To see how some of the themes in these movies comes from Biblical roots adds great meaning and understanding. Part of my purpose is to show how inherent are Biblical truths in the human psyche for in seeing this people may grow a more intentional love for the Bible.

My first observation is this: The introductory story in the movie is about Greek myth. It tells about the battle between Zeus and Aries, and how Zeus barely defeated Aries but did not kill him and so made the paradise island for the Amazons to live on in peace. He also gave them the God-killer so that they could have a chance to destroy Aries when he comes back. In watching the movie several times this all looks very much like the story of the fall of man and Adam and Eve. The garden of Eden is like paradise island and then in both man was corrupted with greed, ego and hate. Aires would be Satan who defied God and tempted humanity and corrupted their hearts. Also, the artistic way the myth is portrayed on screen looks a lot like traditional paintings of biblical scenes. The movie makers did not shy away from this look or the clear comparison. Its not overt but it is there.

My second, and more significant observation, has to do with the traditional values of wonder woman. In my previous article I wrote about how wonder woman comes into her full womanhood by her relationship with Steve; it makes for a wholesome, sexy and compelling story. Diana struggles the whole time with her naive feelings about life and her role, and with the nature of evil in the world. It is Steve who teaches her that the world is in the balance of good and evil and that it is about believing-in and fighting for the good that matters, not a fantasy that removing one man will remove all evil. This is an expression of true faith, faith that comes from insight and love and most of all in deed. At the end she says, “I believe in Love, that no superhero will ever overcome the truth that everyone must fight in freedom for love” (that is a paraphrase).

What is so interesting about this is that Wonder Woman, a feminist Icon, expresses traditional values, and brings out the best of them in a compelling way. I say traditional values in their best sense for this reason: Diana is naive and an innocent to the world, and she has yet to learn to integrate herself into the nature of the world, but she is also in essence correct in her passionate belief in herself – so she has both the wonderful quality of innocence and love for moral life, AND she has the power and conviction to overcome the falsities and evils she is up against. She carries a fierce moral sense in her, is loyal to all honesty, and she loves one man with a pure love. But she needs to add wisdom to her self, and Steve provides this guidance in his own haphazard way. In a biblical sense a woman is the form of love and a man the form of wisdom and together they achieve a union that is the highest love. It is implanted from creation that there is a man for a woman and a woman for a man. Women are generally softer, more comely and nurturing and beautiful. In general men take more license in life and morality, are rougher, stronger and more intellectually oriented. Diana is of course much stronger and more capable than anyone, but she is also fully a woman. She is stunningly beautiful and feminine, she wants to nurture and heal babies and the wounded; she enjoys her beauty, she even submits to a fashion show, and is yielding to others power even though she fully possesses her own. The culmination of the movie is fundamentally founded in these truths – when Diana is pinned in metal by Aries and the fight doesn’t look like its going well – she sees Steve flying in the large airplane that is going to deliver destruction to thousands by chemical gas. At this moment there is a flashback revealing that Steve and Diana opened their hearts to each other a moment before and Steve professed his love to her and she professed her understanding that ‘it is about believing’ as he taught her. When she sees the plane explode in the air she – recognizing that Steve sacrificed himself and his love for her the higher cause of God – she explodes in a passion of love; the full magnitude of her love and admiration for Steve – and now her grief – enters her soul. This is the peak of their union, of their love for each other – but that is sublimated to the even higher love of service to God and country. Her recognition of the truth of spiritual love gives her the intense passion and power to burst out of the metal bonds Aires has put her in, and at the same time busts through any remaining doubt from her immature self and comes into her full powers and self-hood. In the final battle encounter with Aires she collects power in her forearm bands from a strike that he throws at her. With this power she knows she can now destroy him, and says with perfect confidence, “Goodby Brother”. This is significant because she has been told that she was made of clay by her mother which is the fantasy version of herself. Throughout the movie in fact she has been told  ‘you understand very little child’ by her mother and by Aires. By saying ‘goodby brother’ she acknowledges that Zeus is her father, since Aires is her brother. This shows she finally truly knows who she is, and that she also removes all remaining family definitions of herself and comes into her true power. As she goes to kill Aires she repeats what Steve told her – ‘its not about deserving its about believing. I believe in love’. It is because of this passionate love and union with her man that she fulfills her destiny. She says I believe in love, but it could just as well be that this expression of faith be ‘I believe in God’, but the movie stops short of going there. All of this exemplifies the these powerful words spoken by Jesus: “There is no greater love than to lay down your life for you neighbor”.

Its interesting that in spite of the Amazon’s greatness as warriors Diana’s mother is still portrayed as a protective mother – a traditional, common and realistic portrayal. Diana’s mother helped her as a child but could not help her into true identity and power. As the Bible says, ‘Put off mother and Father and cling to your husband’. This is necessary in divine order to come into our own.

My final observation is that wonder Women culminates with a salvation scene. This is a biblical theme that Many great movies resolve with at the end. The Matrix is one of the greatest examples: at the end, after three movies of dark and grey colors, there is suddenly a beautiful scene of green gardens and a colorful sunset, and peace is on the earth as the Oracle, Seraph and others converse and take it in. At the end of ‘Lord of the Rings’ movies there is the scene of peace and fellowship where those who have fulfilled their destiny are taken in the ship to the light that leads to heaven. In Wonder Women after she destroys the evil Aries, which she believed all along was her destiny, all the soldiers, both the German’s and allies alike, are shown as if waking up after a long terrible nightmare. In the sky there are beautiful soft colors of dawn after the long night of fighting. The soldiers are shown with looks of surprise and joy and embrace each other. These scenes are very powerful to the human soul (and Biblical) – for there is probably no yearning stronger than the hope of salvation in heaven after the long, hard faithful journey.

Actually, I will add a forth observation I realized. The movie makes a big point of showing that Diana is unaware of her true nature and only gradually comes into the awareness of her ‘godhood’. She is the God killer, but does not know it, and progressively discovers her powers and finally, with difficulty, realizes she is a ‘god’ when confronted by Aires, and then she uses her new confidence in her powers to defeat Aires. This is reminiscent I believe of how Jesus gradually became aware of who He was. Jesus did not know He was God at birth, but came into this awareness as He overcame all the dire temptations put upon Him. Also Diana is greatly Tempted by Aries to rule humanity with him, and have all power of the earth. He tries to persuades her to see the hate and destructiveness of Humanity, and she struggles with it. This is very much like in the Bible where the devil tempts Jesus in the desert with all power and glory if He will bow to him.  it can be shown that Jesus progressed into knowing who He was b y correspondences, but that is way too complex to explicate here. (As a brief example, in the Old Testament the moment Abraham is promised the great covenant that all would be his progeny  corresponds to the first moment Jesus understood His mission and who He was. This most likely puts this awareness somewhere around His late teens. I will write an article on the correspondences in the story of Abraham soon).