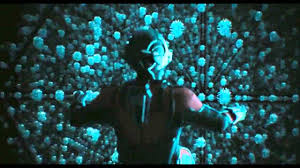 When a Sperm Penetrates an Egg there is a Burst of Light. How it is that this Flash is the Beginning of Life