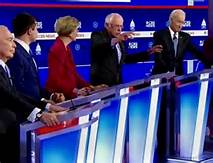 PC, socialistic thinking is a like a haze trying to seduce us into passivity – it smothers and kills the soul and debases life, but Trump’s persona and message is a blow torch busting through this kind of thinking (along with many others). All of our voices and lives matter. America only truly works by being tethered to God – strength with compassion, like the eagle holding in his talons an olive branch and arrows – the ‘magic wand’ that is the antidote to greed. Socialism harbors greed and hides evil, exactly what God doesn’t not want.

The dems think they believe in socialism. Like Bernie, they concoct policies that would literally open the borders to anyone and give them free healthcare and other things. They are completely undiscriminating as to the motives and values of illegal immigrants. When it comes down to it the dems pushing this stuff – don’t really hate trump – they hate themselves for not carrying their own weight, and for getting away with murder. Deep deep down every criminal wants to get caught, but they hide that from them self and have no peace. The dems want to normalize their behavior – giving away free stuff, decimating their own back yard, and the shoulders of those they stand on – so they can justify what they are inside and don’t have to ever see what they have become.
Every sensible person knows that in order to be psychologically healthy you have to establish borders with people, otherwise everybody and their brother who can’t face themselves will take advantage of you. There is also no way to have genuine intimacy and good friendship if one doesn’t discern the quality of who they associate with. It’s the same with a nation, you have to have good borders and only let people in who assimilate and contribute.
The dems don’t have this, they imitate Obama for political identity since they have no center; their debates become a pansy match over who shouts the loudest, their caucuses don’t work; they finances are bad. All these are signs they don’t like or know themselves, and are in no shape to lead others.
When the dems don’t carry their own weight they make others responsible for doing it. They are full of fear of success so make policies that are doomed from the outset (but embrace mediocrity and failure). Because they can’t face themselves, like all narcissists, they take advantage of others and put their pain on others. Like Newsome and the other sanctuary city governors and mayors who trash their cites, allow the harm and murder of citizens, and then blame others for it.
The dems exemplify those who have an exile in their personality that runs them and determines their actions, instead of acting from their core self as a person of integrity strives to do. They keep going deeper and deeper in denial so they can believe in their lie no matter how absurd it looks to those observing. They dems have no real conviction in socialism; they are like bratty children in a nice house that feel entitled to act out and destroy things as long as they know there are adults in charge.

The basis of liberal thinking comes from adopting the ethos of false compassion, which turns into rage because it lives by half the equation of life. Lord said to be wise as serpent and harmless as dove and these are meant to be in union. To separate them, as libs do with blanket compassion, makes their compassion external only; by investing in half half the equation they use lots of energy and emotion to justify their irrational position. They suppress and overlook the other half – wisdom – and this part as a result harbors rage.

DT has heart for serving, not a prudish Christian, a real Christian in heart and action; loves God and country, a man’s man, savvy businessman who sees through bullshit. He Stands up to evil for sake of people, fights for God and Christianity in USA. The greatest Sign of man God is using- exposes and defeats corruption & inspires the people. Most dem leaders never show an ounce of forgiveness; their intent is only to leverage obstruction and de-construction of USA. Trump forgives quickly, honesty – there many political opponents who he battled with and then when its over he appoints them, or supports them and they work together for good – because he cares only about the end Game – that America be restored to integrity and Godly identity as a light to the world.

People think the freedom to avoid and do evil is freedom. Externally it’s freedom, but internally it is not. If persisted in it leads to spiritual slavery, which is the opposite of freedom. And in the end what is internal is the only thing that mattes. This is not so obvious in this world, because here we can hide, but in the spiritual world it is very very clear. Denial and hate together are slavery to evil, and cause one to go deeper and deeper in order to not see what they have become.

WHY JESUS SAID, "LEAVE JUDGMENT TO ME": INSIGHT FROM C. S. LEWIS AND SWEDENBORG ON WHY HE SAID THIS