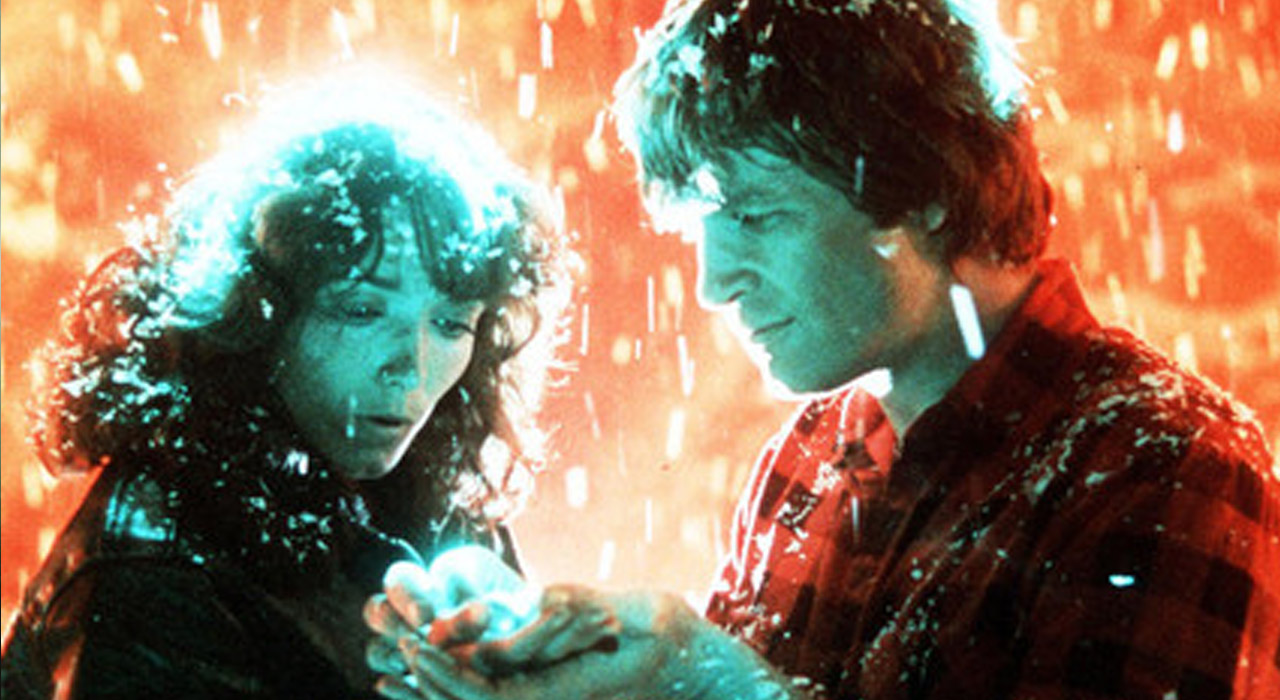 ‘The Baby Will Know’, Incorporating Wholeness in the Soul: Interpretation of the Movie ‘Starman’

In the movie Starman there is an enormous sense of love and redemption. The movie can be seen as a Christ allegory with Biblical themes. The alien is at once wise, possessing supernatural powers of healing, technology and resurrects others; but he is also profoundly innocent, knowing nothing of life on earth, but taught by a normal, kind, loving woman. Like Jesus he must grow from being a helpless baby into the One, a teacher of divine love. In the movie it is implied that the fulfillment of this will take place in his child. Jenny Haden is barren, but he gives her a child when they eventually make love. He tells her she will have a child, and that it will be a boy, that he will be a great teacher on earth. This is reminiscent of the divine conception of Jesus, and also the miraculous brith of John the Baptist in that his mother Elizabeth was very old and barren. The alien is a Christ figure, along with the child to be. He tells Jenny that the Baby in her will grow up to be a teacher of humanity, and have the inheritance of his soul and powers.

He says, “shall I tell you what I find most beautiful about your planet. You are at your best when things are worst”. This is a profound principle of redemption. It is the constant effort of the Lord’s providence that evil not be hidden, and so it often happens that evil is revealed when terrible things happen, and hearts are changed. For instance in 911, it was a horrid tragedy, but the the experience had the effect of engendering many heroic stories and bringing many people back to faith, or deepening their faith. Grief often awakens and deepens the soul, stimulating the fighting spirit. The greatest example of this is in the story of the Lord. The greatest darkness on earth that ever was and ever will be was in the times before Jesus incarnated, and this is why he came. The greatest evil had to be matched by a greater love – and so it was. The divine truth of love is the most powerful force in all the universe, and with this power within Him Jesus defeated all the forces of evil, and put heaven and earth back in order. This battle was waged from the single human body of Jesus, step by step, by profound skill, awareness and love – against forces that constantly raised the stakes to destroy him. We see it on earth in the gospel stories, but this is only the tip of the iceberg compared to what he was doing at the same time in the spiritual world. He is the ‘one’ who provided redemption, and we love Him for it. This feeling of love for the redeemer is the essence of worship. It is the same feeling we have for a military man that performs great deeds of sacrifice and so deserves our honor. There is something innate in the human soul that recognizes this – we respond to true acts of sacrifice and skill when a man or woman puts their life on the line for others. This is why Jesus said, “There is no greater love than to lay down your life for another”

More than anything Starman evokes this feeling. (The music does this also using two hollowed notes back and forth that inspire deep feeling.) He redeemed the life of Jenny Haden, resurrecting her and making her a kind of sacred mother when she was once barren, bereaved and had little prospects. But he also gives his sacred hope of love and redemption to all of humanity in the child that will be.

In the movie, Starman has been using little spheres that have given him the power to withstand enormous explosions, and to resurrect Jenny when she is shot. Starman gives Jenny one of these secret balls at the end while beautiful music fills the heart with deep feeling, and tells her to give the ball to their son; he says, ‘the baby will know what to do with it’. He fulfills Jenny’s life through true love for each other, and he also seeks the same for humanity. The balls are potentially full of symbolic meaning. Carl Jung interpreted the ring-like spheres of UFO’s as projections of the individuals yearning for wholeness in their soul. He talked about how people had lost something in the mechanized, industrialized world and saw wholeness as outside themselves. This causes pain and loss, and it is confusing as how to get it back. I think the empowered spheres symbolize wholeness, and the child will know how to use them, and will teach people how to incorporate internal things into their life and soul. The balls are containers of spiritual intelligence, of internal skill that brings fulfillment, of the power of love that carries within it all the information to achieve their ends. The movie evokes this desire, feeling and hope.

The greatest low tech scene ever is at the end of the movie, after Jenny and Starman express their love for each other. The Camera is entirely on the face of Karen Allen; it is understood that Starman is rising to the ship and leaving and the event is scene in the colors passing over her face; she yearns with complete innocence and vulnerability. Her large eyes trust with love as the light fades to dark, leaving us with the knowledge that she will now be left to abide in love to these memories the rest of her life. What is spiritual looks to the eternal.