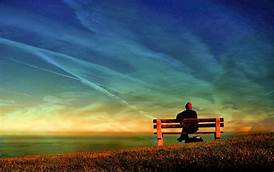 35 “Be dressed ready for service and keep your lamps burning, 36 like servants waiting for their master to return from a wedding banquet, so that when he comes and knocks they can immediately open the door for him. 37 It will be good for those servants whose master finds them watching when he comes. Truly I tell you, he will dress himself to serve, will have them recline at the table and will come and wait on them. 38 It will be good for those servants whose master finds them ready, even if he comes in the middle of the night or toward daybreak. 39 But understand this: If the owner of the house had known at what hour the thief was coming, he would not have let his house be broken into. 40 You also must be ready, because the Son of Man will come at an hour when you do not expect him.”

“Be dressed ready for service and keep your lamps burning”. To desire God is the beginning of perception to see. This verse means what it sounds like, that is, be ready and alert to the urging of God and the needs around you, and persevere in trusting Him. We can then feel the  prompting of God within us, and if we have the desire we can see the movement of God in our community and nation. Then our will is moved to respond to support the people and leaders who are fighting for him.

In the parable of the ten virgins the ones that had oil in their lamps entered the wedding, because they had the union of love and awareness for the Lord in their heart, and so, were prepared to enter heaven. The ones who had lamps but no oil had the form but not the substance, meaning they had faith, but not faith in union with charity. Lamps burning is a powerful image of the union of love and awareness together, – which Mary of Bethany is the greatest example of. Mary was on fire with the love for Jesus and the awareness that He must fulfill His mission and be killed on the cross. This means she knew that He was God and had the power to do what He had been teaching everyone, which is that he would resurrect on the third day. She, no doubt, did not know how or even why, but her love for Him, and what He had done for her, elevated her perception so that she had faith that He would do as he said. The disciples believed he was he Messiah and the son of God, but she was the first to see that he was God Himself. This perception is the most essential of all for faith because it is the truth and brings his presence closest to us. Mary’s action of anointing Him before His burial and her outpouring of love shows she had this awareness. And what show it more than anything is that Jesus memorialized her love, faith and action for all time.

“Like servants waiting for their master to return from a wedding banquet”. Wedding in its highest sense refers to the resurrection, because it is the consummation of the Holy marriage; it is the culmination of the glorification process wherein Jesus merged His human body with His divine soul, thus making His human divine and taking it into heaven. ‘Servants waiting for the master’ are those who learned to have faith in His divine, who believe in the resurrection and commit their heart to Him. In Jesus’s time the first to be initiated into this awareness were those who received baptism from John the Baptist, because these showed faith and became receptacles of heaven. The connection with heaven had been lost and this is why Jesus came down. John had to initiate the external baptism as the new correspondences with heaven; John performed the external baptism to pave the way before the internal baptism of Jesus could be received – this process had to take place in this way – because the external is always the foundation of the internal; and, because correspondences are the essential structure that creates the connection between heaven and earth. So those who received John’s baptism were the first who were ‘servants waiting for the master’. The Baptism of John established the new correspondence between heaven and earth. There had to be this correspondence for man to have knowledge of heaven and God; if not mankind on earth would spiritually die. Without a living correspondence mankind would be overrun by evil and spiritually and physically fall into abysmal darkness. The birth of Jesus was the two edged sword that both ended the Jewish nation as the means of correspondence, (as it had existed for centuries in the Old Testament) and established the new Christian church.  Those waiting on the Lord are those in the true new Christian Church.

“So that when he comes and knocks they can immediately open the door for him”. The Lord is always turned to us, the door is always open; and we must turn to Him, meaning we have the capability by the faculty of our will to receive him. The will is of love and we use our mind to understand its feelings and guide them intelligently. To the degree we acknowledge the Lord and come to love and understand Him is the degree to which we can receive Him. The relationship between God and man is reciprocal in this way. He influences us to respond to is urging and we must incline our heart and mind to receive it.

“It will be good for those servants whose master finds them watching when he comes. Truly I tell you, he will dress himself to serve, will have them recline at the table and will come and wait on them”. The soul of man is truly fed in a spiritual way by genuine spiritual principles or truths. Our soul is an organ, a complete spiritual organ in the human form. Just as the eye is an organ that receives light, the soul is an organ that receives love and wisdom from the Lord. Those who learn to have internal faith in Jesus, no matter what they have been through, He will restore them. Truths of the Word, spiritual principles, honesty, trust and humility restore the soul of man. We know that the body receives food to nourish it, and that the food taken in needs to be digested. In a similar way Jesus gradually softens and regenerates our soul with trials of life and true spiritual principles that heal the traumas in our psyche, removes falsities, and brings in light to our mind and love to our heart.

“But understand this: If the owner of the house had known at what hour the thief was coming, he would not have let his house be broken into”. This refers to the universal spiritual principle that we can only receive God to the degree we reject evil. Jesus cannot help us if we don’t actively will to resist, remove and reject evil. We all have hereditary evil from head to toe, which allows us to be tempted. It is our job to resist and He will help us to remove the evil as we become aware of it as best we can. To the degree we entertain and act on evil God cannot enter us. As the Bible says, ‘You don’t put new wine in an old wine skin lest it burst’.

Both the rich and the poor are in heaven. Rich in the Bible in the internal sense does not refer to money but to those who have a lot of information but do not have love for the Lord. When the Bible says ‘it is harder for a rich man to enter heaven than for a camel to go through the eye of an needle’ it means that those who think they know it all and are full of pride block themselves from heaven. Poor refers to those who do not know of the Word and its truths but yearn to know. The Lord providentially provides for those who yearn truly.