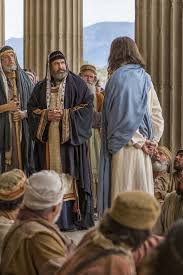 Learning from the Way that Jesus Deals With Evil

“Then they came again to Jerusalem. And as He was walking in the temple, the chief priests, the scribes, and the elders came to Him.  And they said to Him, “By what authority are You doing these things? And who gave You this authority to do these things?”

But Jesus answered and said to them, “I also will ask you one question; then answer Me, and I will tell you by what authority I do these things:  The baptism of John—was it from heaven or from men? Answer Me.”

And they reasoned among themselves, saying, “If we say, ‘From heaven,’ He will say, ‘Why then did you not believe him?’  But if we say, ‘From men’ ”—they feared the people, for all counted John to have been a prophet indeed.  So they answered and said to Jesus, “We do not know.”

And Jesus answered and said to them, “Neither will I tell you by what authority I do these things” (Mark 11:27-32).

The religious leaders are intent to entrap and destroy Jesus by manipulative legal means, which we see happening in the world today. It is exactly what people like Mueller, Schiff and others are trying to do to Trump and his allies. Others like Hillary, Pelosi and Cortez try to gain so much power they can enforce their will. As long as there are consequences these types have to, in some degree, follow social norms and civil law, but they get away with as much as they can behind the scenes. Once they gain enough power they abandon pretense and keeping up appearances and destroy others openly. This is why now the democrats have gone to the extreme and are no longer hiding their socialist goals. They used to try to keep this under wraps, but now openly propose and advocate for it. Socialism is the tool of evil, because it presumes on the good will of its leaders and people, and has no checks and balances; it has no check on greed, and thus goes they way of corruption and destruction every time.

In America, under Obama and ‘the would be king’ Hillary, evil had everything in place to destroy America. They had deep state operatives infesting many positions, they were hiring and electing  Muslim activists in high places. They used, and continue to use, PC multiculturalism to snow the minds of the people and erode their will; they ally with Muslim activists and illegal immigrants that hate America and western culture; they use ‘the inviolable cause of climate change’ to promote Globalism. They try to keep the minds of the people blind with a constant barrage of lies from the media, meanwhile, behind the scenes, their leaders grab more power and manipulate and implement laws in their favor. Their goal is to slowly take over power so they can destroy America from within by establishing socialism. They know once they control America the rest of the world will be easy. Once they have enough power they abandon appearances and rule with an iron fist.

This Bible verse above shows us about dealing with evil, the corrupt, the devious. Evil is free, but it is driven by hell. Those who choose evil do not have true freedom. It is called infernal freedom because they can act and do their deeds, they can do as they please, but they are slaves to its motivation. All that the leaders in the quote above can do is obstruct, avoid, hurt, ruin and destroy. All of these things are from hell, and they feel the pleasure of what they accomplish but it is only temporary, and they must get more. At the core of evil is a burning envy and hatred of the Lord and His heaven.

People in evil hate the word ‘Lord’ because it implies submission, ultimate respect, love and devotion – and the evil refuse to submit to anything, and therefore never find peace. But in truth human happiness depends on being able to respect something worthy. It is essential to our mental and spiritual health to be able to trust. It is in our nature as human beings to receive and surrender to that which is worthy – which is true of the Lord.

The end game purpose or vision of evil is to destroy the world. The leaders in the verse above want to rule the world, and their plan is to kill Jesus who wants to save the world. The subjection and destruction of the world is ultimately always their end game, though they themselves usually don’t know it until push comes to shove, and their real monstrous motivations come light. In the end the destruction of the world is the only thing that validates their world view and hearts desire. The pawns of evil don’t really know this is the end game purpose of what they do, but they are contributing toward it.

You see this in the world today. The means evil leaders are using to destroy the world today is globalism and socialism. These are both forms of spiritual enslavement which is evil. They both reduce and ruin freedom which is evil. They both seduce people into a small identity, and gradually remove the variety of life. These isms always seek to remove God and religion from the people, and thus destroy motivation, inner resources, awareness, and thus true freedom.

Jesus will not tell them what his authority is because the truth is only meant for the sincere. The Word and the truth has a built-in protection against those who would profane it. Even if He tells them they cannot hear it and will only use it to prosecute and kill him. Jesus wants to spread and communicate the truth, but only in a way that it is safe. He speaks to the people in parables because this is the safe way for them to receive it. The people in His time are very external in nature and parables are an external expression of the truth. The Bible has an external and an internal sense. It is very significant to see that the external is a container and protector of the internal. This is extremely important to understand so we can see how and why Jesus communicates the way he does and when he does.

More than anyone in the world today Trump demonstrates how to deal with evil. Trump’s absolute refusal to back down under the Left’s grotesque onslaught has emboldened the conservative soldiers on the battlefield, and it’s left the Liberal Media complex bewildered and confused. They’ve never been confronted by a man of genuine compassion that’s also true bad-ass.

The Great Correspondence that Sheds light on How Energy Exists in the Vacuum of Space, and the Source of Dark Energy