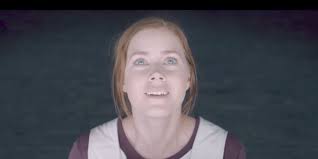 Part 1: The Movie ‘Arrival’ – A Springboard to Seeing Principles of Heaven and the Bible

Arrival is a great movie. Great themes, music and acting, and deeply moving. For me it is of the caliber of Interstellar. And like that movie it seeks to make meaning, and in that effort it intuitively creates allegories of heaven and God.

The scene near the end where Louise rises in the black-shale colored pod and enters the alien atmosphere without any suit evokes a very heavenly feeling. She is weightless and every detail of her hair and face is sharp and flowing. There is primal wonder and alertness on her face that has been reduced to utter nakedness from the presence of pure white light in that place. Her face is blanched white and child-like from the higher light and presence, yet she slowly regains her composure, and her mature intelligence is there. All this is consistent with the nature of heaven in that in heaven our senses and abilities become many times more acute.

When she entered the native atmosphere of the aliens it also took her a moment to be able to breath in the atmosphere, which is true of every society of heaven. In each society of heaven the atmosphere is composed of its quality of love and use, and one must be in harmony with those qualities to be there. Of course it could be that they were representing the different natural atmospherics of that place, but it still works as an allegory of heaven in that it was a very spiritual experience. Louise speaks with the enormous aliens not fully understanding what they want of her and of humanity but yearning to understand more, which she will in time. She asks the alien how it knows the future and the alien tells her that ‘you too know the future’, and it is later revealed that she does understand the past and future as the story all comes together.

Arrival demonstrates allegories of heaven and spiritual/religious themes in several ways. I will use the movie as a spring-board to elucidate some of these themes and how they relate to spiritual principle. Louise in the end understands the past and future, and the meaning and purpose of her life. This makes her like a prophet particularly in that her actions are critical in working with the aliens to save both the aliens and earth. For they tell her that they will need the people of earth 3000 years in the future. The goal of the aliens, which Louise is instrumental in helping them to accomplish, is to bring cooperation and greater peace among the peoples of earth. It is a universal principle of life that no-one is allowed to see the future for that would compromise freedom. We can sometimes see in hindsight the providence of God but in the moment we must be free to choose from ourself, for this is what allows our soul to transform in the process of regeneration. Even with Louise she only understands the future in the moment she needs to act and it takes great discernment on her part.

The circumstance I just described tells us something profound about the nature of God and the prophets. Part of God’s infinite wisdom and omnipresence is that he is present to the past, the future and the moment at the same time in the spiritual world. The wisdom of the aliens represents this as they have great sight into the future as demonstrated by their awareness that 3000 years in the future they will need humanity. The capabilities of the Aliens is similar to the abilities of the ‘bulk beings’ in Interstellar. They have the ability to know the future and wisdom to guide earth to a safe future, but they need humanity to work with them; humans are essential to them to accomplish the good they seek. Looking at the overall picture, the aliens arrive when humans are close to destrying themselves, just as Jesus was born on earth when humanity was on the brink of self destruction.

All of this speaks to the very important principle that the relationship between God and man is reciprocal. This is an extremely valuable quality of God to take in. It doesn’t make God any less omnipotent; it does make him a lot closer. God has no needs except one – to be of use. Love is expressed through use. Modern religion to a large extent does not value the reciprocity between God and man enough. Too often God is overbearing and everything has to be taken to him. Perhaps some of this comes from the Catholic church taking all authority to itself in the past, some from the false doctrine of the protestants of Salvation by faith alone, and some by fearful fire and brimstone teaching. But God does not change us by unilateral means – we have to cooperate from our own will in the process. This self agency in the relationship is very healing to understand for a lot of people who feel anger at religion. Movies like this inherently express Biblical ideas, knowingly or unknowingly when striving to make meaning, which is a beautiful thing.

The depiction of Louise as prophet gives us an interesting view of the immense wisdom of God. In contemplating the whole scope of the Bible we see that the prophets of the Old Testament were given awareness of events to come many hundreds of years before they were to be; and much later in the gospels these events come to be by the life of Jesus. This means God had awareness from the great past and used prophets from the Old Testament to express it. Also, the disciples in the New Testament foretell events of the future. Similarly, (although it is all condenced into one woman’s life) Louis was given memories of her future daughter and her daughters death, and at the same time she was given awareness of the Aliens message to the world. She gradually understood what she had to do to serve the Aliens purpose. Like the Bible, (and so many other stories) Arrival is a story of redemption both for Louise and for Humanity.