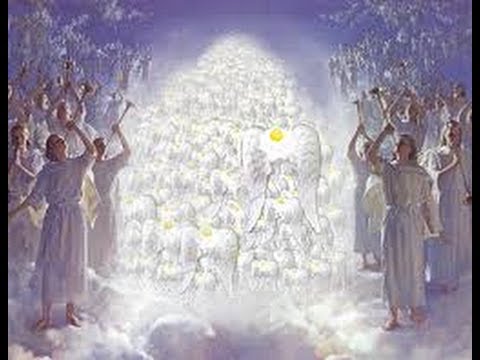 Revelation 8: “When He opened the seventh seal, there was silence in heaven for about half an hour. 2 And I saw the seven angels who stand before God, and to them were given seven trumpets. 3 Then another angel, having a golden censer, came and stood at the altar. He was given much incense, that he should offer it with the prayers of all the saints upon the golden altar which was before the throne. 4 And the smoke of the incense, with the prayers of the saints, ascended before God from the angel’s hand. 5 Then the angel took the censer, filled it with fire from the altar, and threw it to the earth. And there were noises, thunderings, lightnings, and an earthquake”.

This verse must be the origin of the saying, ‘the calm before the storm’. The silence described proceeds the biggest, greatest, most wondrous and most devastating ‘storm’ that ever was. The storm was magnificent and terrible. What was about to happen were the many separate events that collectively are called the ‘apocalypse’, the ‘harvest time’, the ‘judgment’, the ‘release of the captives’, and the ‘second coming’. All of these events are described in the book of revelation and take place mostly in the spiritual world, but certainly effect the natural world.

Present in this silence is the whole of heaven, and it’s general parts are signified. The Bible writes;  “And all the angels stood round about the throne, and the elders and the four animals”. Swedenborg tells that ‘angels stood round’ represents the deep union between the Lord with the whole heaven: “It is plain from the signification of standing round about the throne, as denoting conjunction with the Lord, for by Him Who sitteth on the throne and by the Lamb, is meant the Lord”. He further explains, “By ‘the angels’ are meant those who are in the first or lowest heaven; by ‘the elders’, those who are in the second or middle heaven; and by the ‘four animals’, those who are in the third or inmost heaven”.

The one who opened the seal is the ‘Lamb’ who is the Lord himself Jesus Christ. He is the only one who knows the truth about the innermost state of all people and nations, and thus gives perfect justice and judgment. He is the only one who could open the seal. As just described before him is not just the seven angels but the whole multitude of angels of heaven. To get an idea of the profound unity and joy of this multitude let us look at how Swedenborg describes the dynamics of  ‘a multitude of angels’. In spiritual experiences 356 he writes:

“For much of the night…. a multitude of angels was around me, flowing in accordance with a heavenly pattern that cannot be described to the human understanding; still less can it be described how they move, and speak with one mouth, or with a unanimous voice. This was so perceptible within me, and indeed for so long a time uninterruptedly, that as they speak, nothing could be more clearly witnessed: I saw the pattern, I felt the flow, I heard the unanimity of voice. Each spirit is, and affirms that he is, part of the multitude, thus all together and each one singly…  Afterwards they told me that through the entire night, and several wakeful periods, they were doing nothing else but praising God the Messiah, and doing so with an innermost gladness of heart, so they had not wanted to be let out of that state.”

The ecstatic joy, the individual strength in identity, and the extraordinary delight in community expressed in this quote is astounding. He doesn’t mention the context of this quote, but one can only imagine it would be even greater during the incredible events of the second coming. The angels had been yearning and seeking for the Lord to bring justice to heaven and the world for a very long time and now it had come.

The ‘silence in heaven’ that followed the opening of the seals means there was awe and astonishment in the whole multitude. They were astonished at the power and majesty of Jesus, and at what He was about to do. The angels were given a perception of what was happening. In correspondences silence means an astonishment that comes from perception. Within this meaning is another, and that is the ‘quieting’ or silencing of ones own proprium. Proprium has to do with ones personal, selfish sense of self. In place of this comes in the knowing that all good comes from God and a submitting to it, and thus a receiving of it. In this there is an unspeakable joy, the true sense of self, and gladness for being ‘home’ in the magnificent presence of Jesus, and the community of angels who delight in the happiness of other more than themself.

For centuries the angels yearned of Jesus to restore the integrity of Heaven, to release the captives held in the false of heavens below heaven, to bring justice to the evil perpetrators, and to enlighten the people of earth about the nature or heaven – and now with this silence they knew it was happening.

How Trump's Self-Possession and Unwavering Belief in Sovereignty and The People Is Transforming the World: The Spiritual Principles at Work.