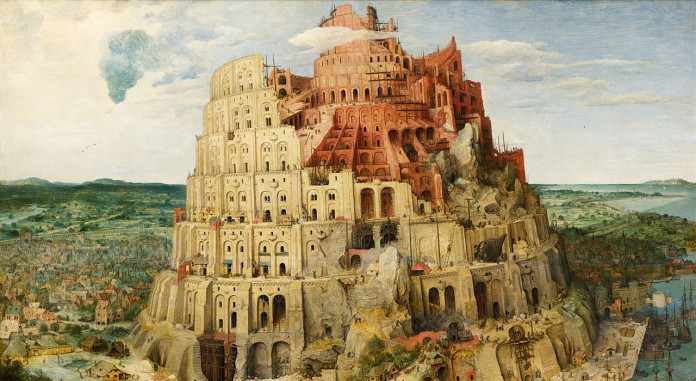 Babylon, in general, refers to evil leaders that use religion to deceive and control people from their own lust for power. This takes place in both the spiritual world and on earth.

The religious leaders of the ancient Jews had become mostly power obsessed. They claimed authority to themselves and kept the people under their power with all the strict religious rules. The people themselves though, still learned of God and religion from them, and if they practiced their faith sincerely, even if it had falsities, they received some degree of connection to the Word and heaven. The religious leaders had to act according to the laws and keep up appearances even if inwardly they were evil. In this way the two were inextricably tied together. The leaders served the purpose of religion, even though they had evil motivations, so the Lord could not separate them from the people until the time was right to abolish the representative church. The same kind of thing was taking place in the psuedo heavens in the spiritual world. The leaders were sheltered from the Lord’s immediate judgement because they were serving a religious purpose to the common people, that is, they provided knowledge of the Word to the people and oversaw all the functions of the temple that provided correspondences to heaven. But when the Lord came into the world everything was prepared for all this to change, and each person would receive justice according to their internal state. The captives specifically then are those who were unjustly kept in the psuedo heavens of the spiritual world. This attack and insurrection of evil forces in the world of spirits (that I just describes as the psuedo heavens) is told by correspondences in the story of the Tower of Babel. I will aduce two places in scripture that describe this situation; the first quote is from the book of Revelation, and the second quote is from Isaiah:

And it came to pass, as they journeyed from the east, that they found a plain in the land of Shinar; and they dwelt there.And they said one to another, Go to, let us make brick, and burn them thoroughly. And they had brick for stone, and slime had they for mortar. And they said, Go to, let us build us a city and a tower, whose top may reach unto heaven; and let us make us a name, lest we be scattered abroad upon the face of the whole earth (Gen. 11:2-4).

Thou mayest take up this parable concerning the king of Babylonia. Jehovah hath broken the staff of the wicked, the scepter of those having dominion; thou, Lucifer, hast fallen from heaven; thou art cut down even to the earth; thou hast said in thy mind, I will ascend into the heavens; I will exalt my throne over the stars of God, and I sit on the mountain of the assembly, in the sides of the north, I will become like the Most High. Nevertheless thou shalt be cast down into hell, to the sides of the pit; I will cut off the name and residue of Babylon and will cause her to become an hereditary possession of the bittern (Isaiah 14:4, 5, 12, 13, 14, 15, 22, 23).

These scriptures tell how evil minded leaders used and abused the power of the Word to set up false heavens and control the people, but were finally taken down in the judgement. Swedenborg describes the inner meaning of the Tower of Babel:

The man…who does not acknowledge a God, is under the dominion of infernal spirits. Knowing this, leaders who build Babylonish towers make themselves a name by means of doctrinal and holy things, for otherwise they could not be worshiped, which is signified in what next follows by their otherwise being scattered over the faces of the whole earth, that is, they would not be acknowledged. And from this it follows that the higher such men can lift up the head to heaven, the more they make themselves a name. Their dominion is greatest over those who have some conscience; for these they lead whithersoever they will; but as to those who have not conscience, they rule all such by means of various external bonds (AC 1308).

The story of the tower of Babel is a description by correspondences of how the evil forces would build the false heavens in the world of spirits and infiltrate the natural and spiritual heaven. Babylon is also a general term that refers to an accumulation of power by evil leaders posing as good, and who then control the people. In the above quote the phrase ‘Their dominion is greatest over those who have some conscience’ harkens back to the description I gave on how cults work. Those who have a conscience, those who have some intelligence and want to please, are more readily led astray by ‘mind control’, or what is the same, the mental intimidation of the the religious leaders. These leaders themselves, talented and skilled in the art of deception as they may be, are themselves led by evil spirits from the deepest hells who are much more artful then they. If the process just described had continued without correction, the captives and eventually all of humanity would have lost all freedom at the hand of evil spirits.