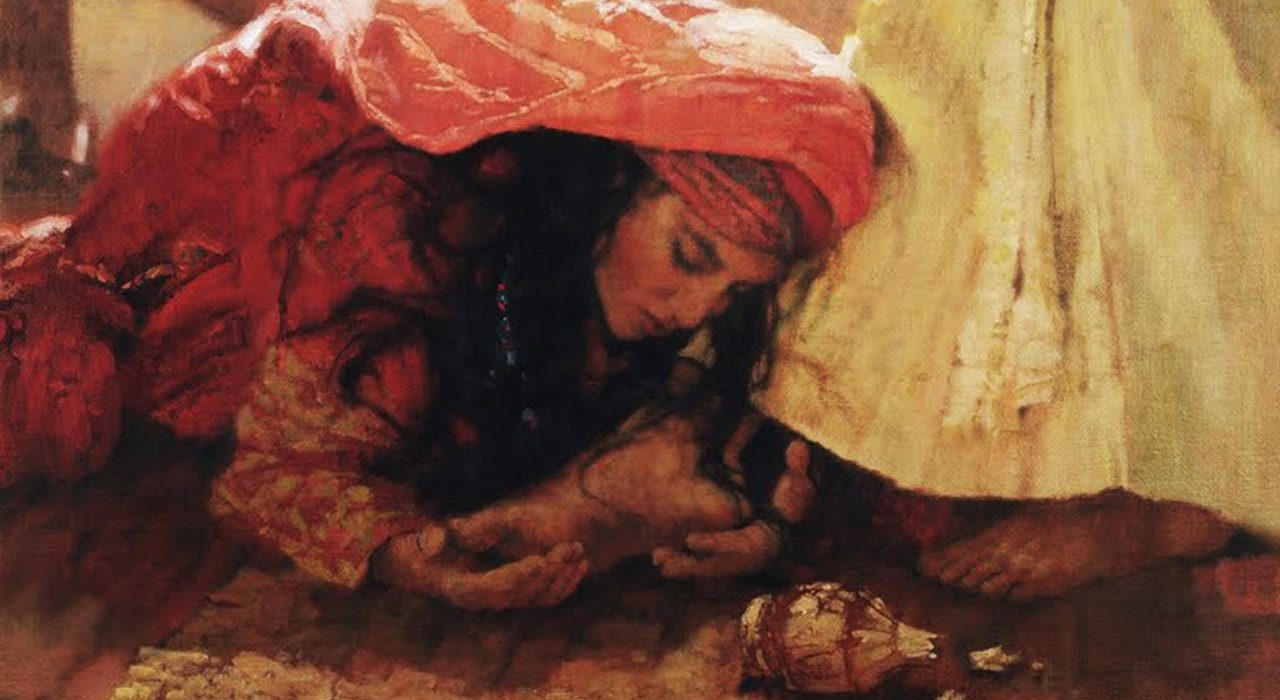 I have mentioned the principle of union in several ways throughout this blog. It is the most fundamental principle to Swedenborg’s writing, and to understanding the spirituality of the Bible. Cognitively it seems to be little known, yet intuitively it is expressed everywhere for it is essentially the basis of spirituality and devotion. It is essential all the great teachings whether it me Zen, Buddhism, shamanistic practices or Christian spirituality. The reason for this is that it comes from the nature of God, or what is the same Jesus Christ as the divine human. In the post on equilibrium I described the marriage between the Lord’s essence and His human, and how this nature in the source is repeated in all things in the universe. In this chapter I will show this principle in the Bible and how through Jesus it is the universal pattern of salvation.

“And one of the Pharisees desired him that he would eat with him. And he went into the Pharisee’s house, and sat down to meat. And, behold, a woman in the city, which was a sinner, when she knew that Jesus sat at meat in the Pharisee’s house, brought an alabaster box of ointment, And stood at his feet behind him weeping, and began to wash his feet with tears, and did wipe them with the hairs of her head, and kissed his feet, and anointed them with the ointment.  Now when the Pharisee which had bidden him saw it, he spake within himself, saying, This man, if he were a prophet, would have known who and what manner of woman this is that toucheth him: for she is a sinner. And Jesus answering said unto him, Simon, I have somewhat to say unto thee. And he saith, Master, say on. There was a certain creditor which had two debtors: the one owed five hundred pence, and the other fifty. And when they had nothing to pay, he frankly forgave them both. Tell me therefore, which of them will love him most? Simon answered and said, I suppose that he, to whom he forgave most. And he said unto him, Thou hast rightly judged. And he turned to the woman, and said unto Simon, Seest thou this woman? I entered into the same loveth little. And he said unto her, Thy sins are forgiven” (Luke .

“Now when Jesus was in Bethany, in the house of Simon the leper, There came unto him a woman having an alabaster box of very precious ointment, and poured it on his head, as he sat at meat. But when his disciples saw it, they had indignation, saying, To what purpose is this waste? For this ointment might have been sold for much, and given to the poor. When Jesus understood it, he said unto them, Why trouble ye the woman? for she hath wrought a good work upon me. For ye have the poor always with you; but me ye have not always. For in that she hath poured this ointment on my body, she did it for my burial. Verily I say unto you, Wheresoever this gospel shall be preached in the whole world, there shall also this, that this woman hath done, be told for a memorial of her” (Mat. 26: 6-13).

This encounter was a very bold move for Mary. The meeting was at the house of Simon, one of the religious leaders. The disciples and other leaders were also there. It was against costume for a woman to interrupt a meeting of men, let alone religious leaders. But May was on fire to seize the moment. In the other description of this event Jesus commends what she did to a place perhaps second only to his commendation of John the baptist; He says, “Let what she has done be a memorial for all the world to hear”. Why does he give such a high commendation?

Previous to this story is the story of the resurrection of Lazures; also, a couple of times where Jesus tells the dsciples that he must go to Jerusalem and be killed there (John 12: 23-24, John 12: 32-33). The disciples do not understand why he must go, and object. In the story of the resurrection of Lazerus both Martha and Mary, as much as they want Him to heal Lazuras, object when he proposes to resurrect him. Jesus has been delayed and when He finally comes, They are upset that Jesus didn’t come sooner to save him from dying. They both are deeply mourning and say, ‘If you have come he wouldn’t of died’. Jesus tells Martha, ‘I am the resurrection and the life, do yo believe I can do this’. And Martha says, “Yes I believe you are the Christ, the Messiah, the son of God’. Clearly Jesus has been teaching all of them about these things. Then When Jesus asks the men to move the stone in front of the tomb, Martha objects. The scripture reads: “The sister of Lazarus, who was now dead, said to Jesus, Lord, by this time he stinketh: Jesus saith unto her, “Said I not unto thee, if thou wouldst believe thou shouldst see the glory of God” (John 11: 39, 40). There is another story previous to the Mary’s anointing of Jesus that is very significant to tell. When the disciples have been sent out to heal the sick; they do so, but encounter a case where they are unable to heal a certain possessed man. Jesus admonishes them as having little faith, and says that for this kind of possession they must have greater faith.

Lord, have mercy on my son: for he is lunatick, and sore vexed: for ofttimes he falleth into the fire, and oft into the water. And I brought him to thy disciples, and they could not cure him. Then Jesus answered and said, O faithless and perverse generation, how long shall I be with you? how long shall I suffer you? bring him hither to me. And Jesus rebuked the devil; and he departed out of him: and the child was cured from that very hour. Then came the disciples to Jesus apart, and said, Why could not we cast him out? And Jesus said unto them, Because of your unbelief: for verily I say unto you, If ye have faith as a grain of mustard seed, ye shall say unto this mountain, Remove hence to yonder place; and it shall remove; and nothing shall be impossible unto you (Mat 17: 15-20).

The reason the disciples could not heal the lunatic is that they believes Jesus to be the Messiah and the Son of God, but do not yet see that He is the divine itself. This is understandable; their learning follows a progression. To be able to heal the profound case they couldn’t, they must catch the vision in their hearts that Jesus is God. For we come into the presence of God to the degree we can acknowledge and perceive this in Him. Swedenborg writes explains:

The reason why the Lord called, the disciples men of little faith when they could not perform miracles in His name… was that the disciples did indeed believe the Lord to be the Messiah or Christ, the Son of God, and the prophet of whom it was written in the Word. They did not yet, however, believe in Him as God Omnipotent, and that Jehovah the Father was in Him; and so far as they believed Him to be a man, and not at the same time God, His Divine, to which Omnipotence belonged, could not be present with the disciples by faith. For faith causes the Lord to be present; but faith in Him, as a man only, does not cause His Divine Omnipotence to be present. (AE 815).

The disciples had not yet got there, but Mary had caught the vision. Unlike the disciples she accepts that He must go to Jerusalem and fulfill his mission on the cross; evidenced by her determination to anoint Him for his death. She herself had no doubt been healed and loved by him previously in her life as He had done for so many others. The scripture says that she is a sinner, and much like the woman at the well, or the condemned prostitute that the people want to stone, He had given her the most powerful experience of love and forgiveness of her life. Of this episode Swedenborg writes: “Jesus said to the woman who was a sinner, and who made his feet wet with her tears, and wiped them with the hair of her head, and kissed his feet, which she also anointed with oil, Thy sins are remitted thee; thy faith hath made thee whole; go in peace” (Luke 7: 38, 48, 50). From these words also it is evident, that faith in the Lord’s Omnipotence healed them, and also that the same faith remitted, that is, removed, their sins. The reason was that the woman not only had faith in the Lord’s Divine Omnipotence, but also loved Him; for she kissed His feet…it is evident therefore that faith from love saves (AE, 815).

So Mary is on fire with both love and awareness, for these two together increase each other in passion. She defies all custom, seizes the moment, and full of reverence washes His feet with her tears, and anoints his head with precious spikenard oil. Those around are indignant at her actions, but she cares not. Jesus protects her. She is the first to fully see his divine, and she owns it; this is why Jesus memorializes her action for all time. She had the vision of love and awareness, and she married them in her soul by taking action. This is the practice of the union of love and truth in our lives. We continually do this, or miss doing this, every day of our lives. To miss it does not mean we are lost or condemned, but that we will have another chance the next time, as we learn from successes and failures.