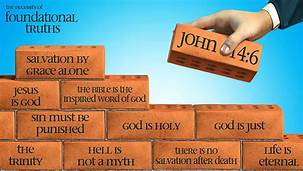 By
Steve Sanchez
0 Comments
0
575 Views
Trump is building a very strong foundation for America to prosper long into the future. He knows what he is doing, who the real enemy is, and how to defeat them. He is gradually winning huge in the courts with appointments of constitutional Judges at all levels. No accident we are winning cases at the state and national level now. Barr is poised to bring justice to the deep state. Trump is successfully in the process of fighting-off challenges from economic adversaries like China, and from violent threats to the USA and the world from the likes of ISIS, Korea, Iran, Islam.
At the same time he is building up allies based on the right principles, a huge part of which is to focus on being fair and not forcing democracy on others, but respecting their ways. The laser focus of his foreign policy is to defeat terrorism and free the people. The genius of this is that it actually organically causes the people to fight for freedom and desire democracy. He also makes countries we help, and the UN, pay their share. He is equalizing unbalanced tariffs with everyone around the world. Slowly but surely he is dealing with the huge border problem with Mexico, and he is bringing a free market based health care system that works. All of these are essential fronts that must be addressed as building blocks for our long-term spiritual and economic health.
Meanwhile the left shows a picture of people who are disingenuous and dissociated from reality and are moving head long into having no foundation whatsoever. They have spent two years fiercely obstructing, and when they do articulate a vision it is the Green Deal, which is utterly impractical and not taken seriously. The democrats are dedicated to making America a socialistic nation which would be its destruction. Defeating the left is Trump’s greatest achievement. They are our greatest threat.
The winning he and conservatives (and their supporters) are achieving is incredibly important for the psyche of America and the world because it is of integrity, brings safety, and upholds God. Like a child that fights its parent tooth and nail, (but inwardly is glad his or her parent disciplines them), I think those on the left know what Trump is doing is right, but they have decided that they are going to fight it even if they are wrong. The difference is a child has innocence and this quality causes them to relent. An adult can do this too, but can also loss their innocence, which means to lose one’s conscience, and stand on pride alone. The power brokers on the left believe that ‘the New World Order’ was inevitable, and would wash over the will of the people to be free. This movement is from the same old dark forces, the machinations of evil that repeat the same mind numbing techniques over and over, promising utopia that is really a hellish, controlled state.
But the Trump movement is standing up and taking responsibility!
Luke 6:48 – “They are like a man building a house, who dug down deep and laid the foundation on rock. When a flood came, the torrent struck that house but could not shake it, because it was well built.”
Luke 6:49 – “But the one who hears my words and does not put them into practice is like a man who built a house on the ground without a foundation. The moment the torrent struck that house, it collapsed and its destruction was complete.”

How Involvement in Evil Causes Irrational Thinking; And How Love for the Good of Others Inspires Spiritual Intelligence