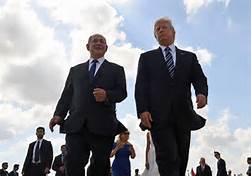 Trump Upholds “We The People” to the UN. Articulates a Godly Vision that Is a Light to the World. God Bless

By
Steve Sanchez
2 Comments
0
1314 Views
Trump so right to uphold ‘We The People’. The affection of leaders should be with the people as DT demonstrated over and over – for this is where God’s affection is.
Over and over DT directed hearts to the principles of sovereignty and independence; he directed the minds of the leaders to their own unique identity and culture – a great good. He also squarely confronted the nations that have gone rogue, and clearly identified them by the fact they are against – and abuse – their own people. His speech was an absolute rejection of the evil of the globalist/socialist ideology that Obama pandered to before him. Trump clearly sees the vision that there is strength in a diversity that seeks and lives in a relationship of care and respect. Each nation, like a person, must have strong borders and a strong center, and from this position they can have a genuine love for the neighbor.
Trump’s speech was a light to the whole world. He wants to restore and build the identity given to each nation and people by God. With that light came the confronting of evil. He showed a firm hand in stopping the evil, and offered mercy to it if it will suffer itself to change. This is the way, and the right vision. The sacred soul of each person and each nation shines brighter on the path of patriotism and love for the neighbor – and by courageously facing the evils that threaten it. God bless