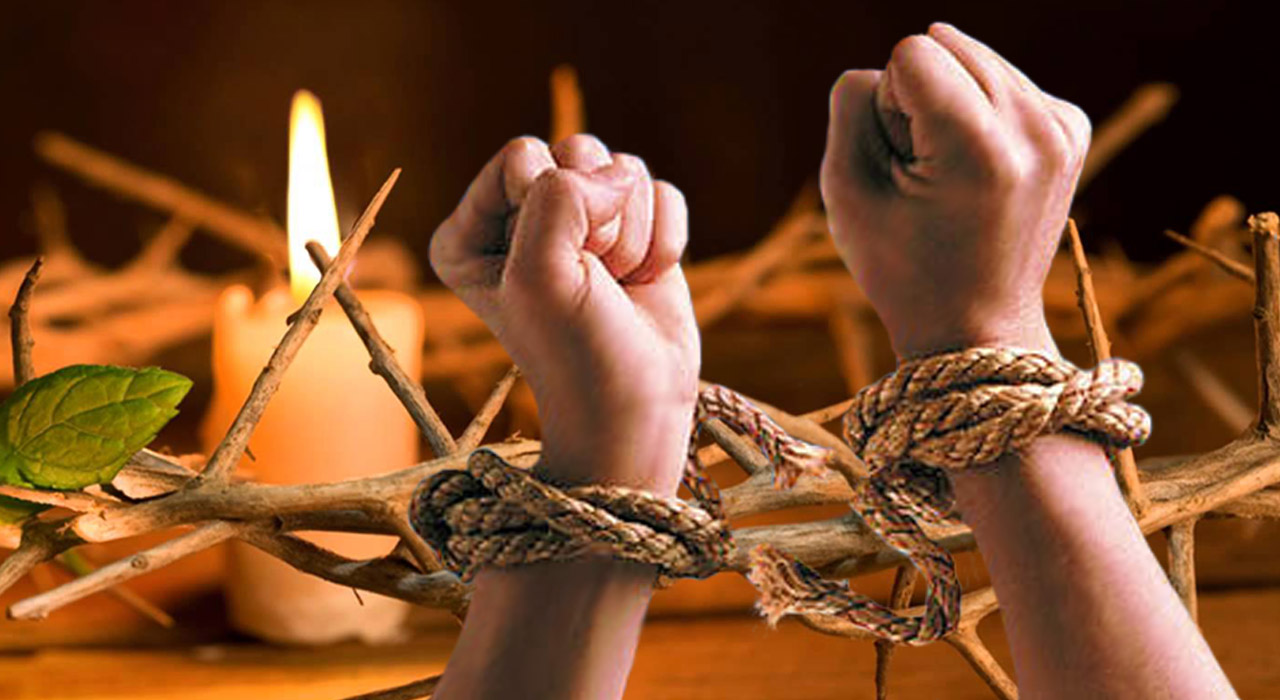 To get a strong sense of the big picture in the Bible it is essential to understand what is meant by ‘the captives,’ and similarly by the descent of Jesus into hell. I have discussed this theme in part before in this blog but it is worth understanding it further. The captives are a direct result of the loss of equilibrium. Most people are familiar with the story of the Lord descending into hell and releasing the captives after his ascension to heaven, but obtaining a real sense of what this means is elusive without an understanding of the loss of equilibrium.

The captives are those who were unjustly intercepted by evil spirits when they died and were held in a pseudo-heavens. When people first enter the spiritual world, they usually seek out loved ones, and they are always attended by angels. However, during the imbalance, evil spirits had undue power in the world of spirits and heaven. The evil spirits used their arts to deceive the new spirits, and, by persuasion and deception, they seduced these people to enter their own city, whether they were good or bad. The city, or the society, the renegade spirits created was not heaven or hell, but rather it was a pseudo-heaven created by the evil spirits where the good and the bad lived together as they did on earth. These pseudo heavens were below the real heaven in the world of spirits, which is between heaven and hell. They were run by evil spirits that posed as good leaders. These cities were defying the laws of the Lord’s divine order, and are a tragic situation that is greatly lamented by the angels. As we have shown before this is part of the decline of religion. Lets look at this in scripture.

This theme of the captives is described in many places in the Word, but perhaps nowhere better than in the parable of the wheat and the chaff. This parable describes how an enemy sowed the chaff with the wheat, which is where chaff doesn’t belong. The two become inextricably tied together, and the Lord tells them to not separate the two until the time of the harvest. After telling the parable about the plants, He then tells the internal meaning of the story to the disciples. The parable is an overview of the judgement, and a description of the process of it. The events described partly take place on earth, but mostlyin the spiritual world. The events described in Revelation are a detailed description of how the Lord separated out the good and the evil in each particular place, otherwise known as the judgment. Without an understanding of the correspondential meaning of the cities, places, and events in Revelation, and without an understanding of how these apply to the spiritual world, it is hard to get a grasp of how to understand that book. It is often asked, “Why did the Lord allow the good and evil to remain together until the harvest?” We will address this question because it helps to give us a tangible understanding of the process.

The activity in the psuedo heavens in the spriritual world mirror what was happening in the church on earth, and we can get an idea of the dynamics there by by observing them in the Jewish religion. The religious leaders of the ancient Jews had become mostly power obsessed. They claimed authoruty to themsselvs and kept the people under their power with all the strict religious rules. The people themselves though, still learned of God and religion from them, and if they practiced thier faith sincerely, even if it had falsities, they received some degree of connection to the Word and heaven. The religious leaders had to act according to the laws and keep up appearences even if inwardly they were evil. In this way the two were inistrictably tied together. The leaders served the purpose of religion, even though they were evily motivated, so the Lord could not seperate them from the people until the time was right to obolish the representative church. The same kind of thing was taking place in the psuedo heavens in the spirituul world. The leaders were sheltered from the Lord’s immediate judgement because they were serving a religious purpose to the common people, that is, they provided knowledge of the Word to the people and oversaw all the functions of the temple that provided correspondences to heaven. But when the Lord came into the world everything was prepared for all this to change, and each person would receive justice occording to their internal state. The captives specifically then are those who were unjustly kept in the psuedo heavens of the spiritual world. In the Old testament the attack and insurection of evil forces on the world of spirits and the first levels of heaven (and the resulting psuedo heavens) is told by correspondences in the story of the Tower of Babel, and in Isaiah:

And it came to pass, as they journeyed from the east, that they found a plain in the land of Shinar; and they dwelt there.And they said one to another, Go to, let us make brick, and burn them thoroughly. And they had brick for stone, and slime had they for morter.And they said, Go to, let us build us a city and a tower, whose top may reach unto heaven; and let us make us a name, lest we be scattered abroad upon the face of the whole earth (Gen. 11:2-4).

Thou mayest take up this parable concerning the king of Babylonia. Jehovah hath broken the staff of the wicked, the scepter of those having dominion; thou, Lucifer, hast fallen from heaven; thou art cut down even to the earth; thou hast said in thy mind, I will ascend into the heavens; I will exalt my throne over the stars of God, and I sit on the mountain of the assembly, in the sides of the north, I will become like the Most High. Nevertheless thou shalt be cast down into hell, to the sides of the pit; I will cut off the name and residue of Babylon and will cause her to become an hereditary possession of the bittern (Isaiah 14:4, 5, 12, 13, 14, 15, 22, 23).

These scriptures tell how evil minded leaders used and abused the power of the Word to set up false heavens and control the people, but were finally taken down in the judgement. Swedenborg writes of the Tower of Babel:

The man…who does not acknowledge a God, is under the dominion of infernal spirits. Knowing this, (leaders) who build Babylonish towers make themselves a name by means of doctrinal and holy things, for otherwise they could not be worshiped, which is signified in what next follows by their otherwise being scattered over the faces of the whole earth, that is, they would not be acknowledged. And from this it follows that the higher such men can lift up the head to heaven, the more they make themselves a name. Their dominion is greatest over those who have some conscience; for these they lead whithersoever they will; but as to those who have not conscience, they rule all such by means of various external bonds (AC 1308).

The tower of Bable is a corresondential description of how the evil forces would build the false heavens in the world of spirits and infultrate the natural and spiritual heaven. If the process just described had continued without correction, the captives and eventually all of humanity would have lost all freedom at the hand of evil spirits.

All of what has proceeded in this book is meant to lead to one particular point: the perception of the magnificence of what the Lord has done for us as the redeemer. We have seen how the people were subject to the cosmic power of sin and death. If this had gone on unchecked, oblivion would have been the result. Without freedom, we are nothing. The freedom to do good is the only real power humans have; for its opposite, to commit to doing evil, is spiritual death. In spiritual death the evil spirits still have power to pursue their interets, but their internals are closed, which means their soul is dead to life. On earth, freedom can be taken away by political systems, economic circumstance, family roles, and many other things, but we have an internal freedom in our soul that cannot be taken away. The former is external, and the later internal. Inside, despite our circumstances, we have a fighting spirit that upholds our identity, passion, and loves. No-one expressed this better than Victor Frankl, the great psycholigist who lived through the Natzi concentration camps; and related his story and beliefs in ‘Mans Search for Meaning’. I see human freedom as a series of concentric circles. It is possible for our freedom to become smaller and smaller within these cirlces, but, no matter how small the outside gets, inside it cannot be taken away. We can choose how we deal with and how we feel about our cricumstances, and by the love in our heart.

In the light of what we have revealed in this article, I believe it is spiritually very healthy to recognize that the Lord alone maintains the equilibrium, and thus that freedom is entirely a gift from God; for with this awareness comes a sense of humility and gratitude toward Him.

Interpretation of Revelation 22:1-12. 'Pure River of Water of Life' and 'Alpha and Omega'