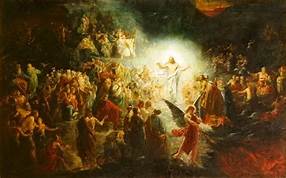 A Brief Description of Some Major Themes Relating to the Meaning of Christ’s Descent to the Hells.

Jesus descent to the hells is a great part of His work of redemption. It is the releasing of those who had been trapped for centuries by forces of hell.

Before the Lord was born there was an accumulating darkness that caused a loss of equilibrium between heaven and hell (Equilibrium is essential to understanding Christs descent but is a big subject in itself). As people died and entered the spiritual world, even if they were good, evil spirits intercepted them by artful deceptions and led them into their false heaven. These suedo heavens were in the spiritual world which is between heaven and hell. Once evil began to tip the tables in their favor, their power increased and increased. The over accumulation of spirits (people) in hell, and in this suedo-heaven eventually caused a dark cloud between heaven and earth that greatly blocked the reception of heavenly influx to humanity. This is what is meant by “Sheol has enlarged itself and opened its mouth beyond measure”.

The captives are a direct result of the loss of equilibrium, which in turn is a result of the devastation of the church and externalization of man. During the imbalance, evil spirits had undue power in the world of spirits and heaven. The evil spirits used their arts to deceive the new spirits, and, by persuasion and deception, they seduced these people to enter their own city, whether they were good or bad. These cities were defying the laws of the Lord’s divine order, and are a tragic situation that is greatly lamented by the angels. Lets look at this in scripture.

This theme of the captives is described in many places in the Word, but perhaps nowhere better than in the parable of the wheat and the chaff. This parable describes how an enemy sowed the chaff with the wheat, which is where chaff doesn’t belong. The two become inextricably tied together, and the Lord tells them to not separate the two until the time of the harvest. This story is a representation of how the captives were caught. Briefly stated it is about the religious leaders who were evil, and used religion to control the people. The reason the Lord could not separate them (harvest) is that the religious leaders were still serving the purpose of upholding and teaching religion to the people which served to connect the people to God. Even though they were doing it for their own power they were serving a sacred purpose and to tear the leaders away would do harm to the people. At the time God was still using the Jewish church as the representative church on earth (there must always be a church on earth), but the time was coming when the representative church would be abolished and Christ would have direct relationship to all. For this reason the captives stayed in the false heavens until the time was right – the incarnation and the new Christian church. So the descent into hell is an essential part of the Lord putting the evil ones in their place, back into hell and releasing the captives, restoring them with great joy into their place in heaven. There is much more to this but this gives an essential idea.

The parable of the wheat and church is a sort of allegorical overview of the judgement, and involves all the events in revelation. The events described partly take place on earth, but mostly in the spiritual world. The same dynamics that took place at incarnation took place at the second coming for at both times a disequilibrium was taking place and religion had become external and used falsely for power. The events described in Revelation are a detailed description of how the Lord separated out the good and the evil in each particular place, otherwise known as the judgment. All of this is part of what is meant by Christ descent into hell.

The activity in the psuedo heavens in the spiritual world mirror what was happening in the church on earth, and we can get an idea of the dynamics there by by observing them in the Jewish religion. The religious leaders of the ancient Jews had become mostly power obsessed (but this again is a long story.) The captives specifically then are those who were unjustly kept in the psuedo heavens of the spiritual world. Christ ‘descended into hell’ to release the captives. In the Old testament the attack and insurrection of evil forces on the world of spirits and the first levels of heaven is prophetically told by correspondences in the story of the Tower of Babel; in Isaiah:

“And it came to pass, as they journeyed from the east, that they found a plain in the land of Shinar; and they dwelt there. And they said one to another, Go to, let us make brick, and burn them thoroughly. And they had brick for stone, and slime had they for morter.And they said, Go to, let us build us a city and a tower, whose top may reach unto heaven; and let us make us a name, lest we be scattered abroad upon the face of the whole earth” (Gen. 11:2-4).

This scripture tells how evil minded leaders used and abused the power of the Word to set up false heavens and control the people, but were finally taken down in the judgement by Jesus in the ‘harvest’.

Here is another scripture that encompasses the meaning of Christ descent into hell in the big picture. It is from Paul:”

(Now that he ascended, what is it but that he also descended first into the lower parts of the earth? He that descended is the same also that ascended up far above all heavens, that he might fill all things.)” (Ephesians 4:9)

This passage refers to his descent in a universal way, it refers to the releasing of the captives, Christ interring the innermost and the liberation of all mankind. All this is the effects of Jesus’ glorified body entering heaven, particularly where it says, “He that descended is the same also that ascended up far above the heavens, that he might fill all things.” There is a very illuminating meaning to this scripture. When Jesus was born on earth He entered into the lowest (natural and physical realm), and by overcoming the world, there came a corresponding extension higher – higher than anything that had ever been before. To move spiritually higher also means to penetrate into the innermost, and Jesus is the innermost part of our soul. After the resurrection all humans had direct, immediate relationship to him – if they choose to claim it. For the Light to show up evil must be removed. Jesus had to remove the evil that had infiltrated heaven to renew all things, which is the descent. Thus, by Jesus entering the natural world, subjugating all evil, and putting heaven into order there was an exponential increase of light available to humanity after the resurrection: “the moon became as the sun” and “I am the alpha and Omega” both refer to his extension into the lowest natural and increase to the Highest ever.