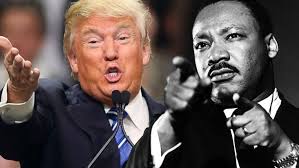 MLK himself was reputed to be a big womanizer, yet he did great good. Schindler was also a big womanizer in his life; he was also money motivated, but God gradually changed his heart to save many Jews. Trump seemed to have these qualities in his life also to some degree, but God grew a rough business man to become a truly great man leading America back to its great identity!

Notice Kanye didn’t kiss Trumps ass while he gave him the most powerful endorsement ever. Man to man respect from those who walk the walk. Kanye rejected group think and gave recognition to the good Trump has done for blacks and all of the USA. The Left was shocked at his expression of truth to power. What Kanye said costs a lot for a man in his position, but everyone knows African American unemployment is now the lowest ever recorded in the history of our Country. MLK’s idea of non-violence has the same spiritual quality to what Kanye called ‘Dragon energy’. Dragon energy, as Kenya used it, refers to a spiritual bad-ass, like Bruce Lee, which is standing up and respecting one’s own internal genius and that of others. That he invoked this term is great for all people and cultures. What Kanye did was a huge leap in empowering black people and all people; it was great moment of cross cultural integration. This is how the spirit of genuine unity comes about – to see and respect the good and abilities of others. Exactly what trump and MLK are about.

Trump Upholds Ordinary Americans as the New Elites and the Heart of America Responds, While the Left Gets More Extreme - Why?