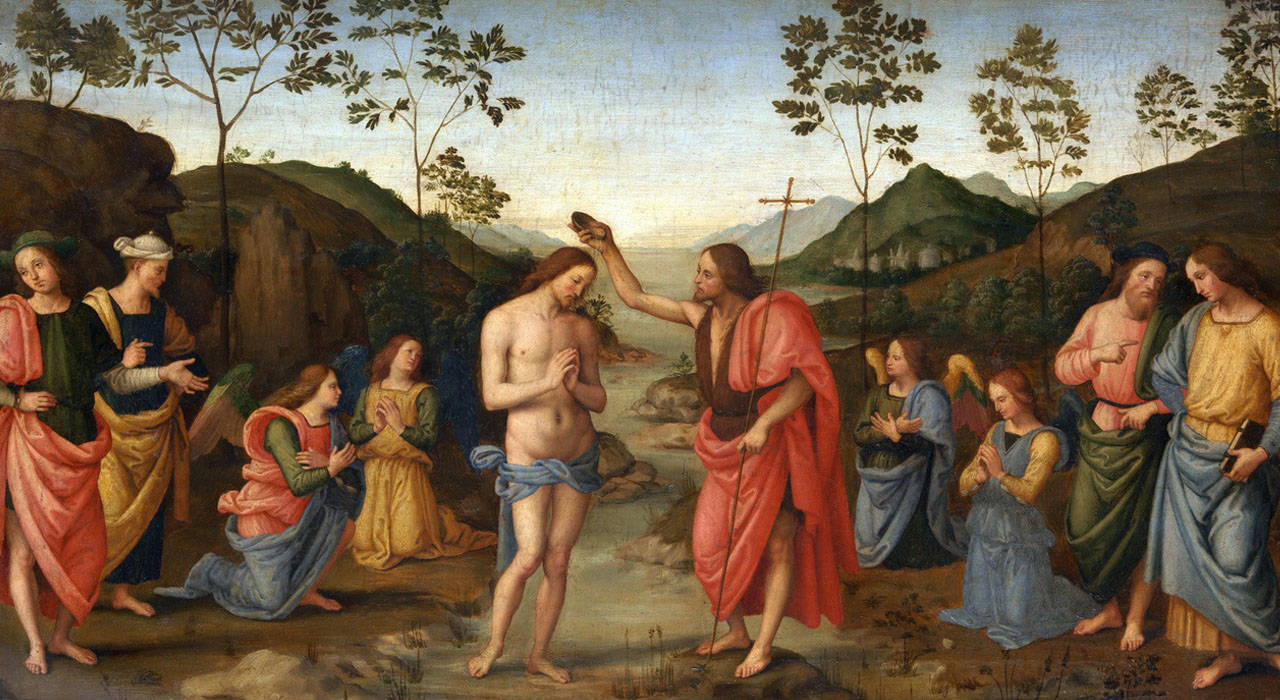 I have tried to explain correspondences as best I can but in reality it takes time, contemplation, and experience to get a tangible understanding of correspondences. The operation of Correspondence is as essential to the structure of the universe as are atoms. Correspondence carries the internal meaning in the words of the Bible that joins heaven to earth. It can only really be understood as it works in each particular case.

John the Baptist represents the Word as to the the Lord, and all the particulars of his actions and appearance can be understood by the use he was providing to restore humanities connection to the Word (divine truth). To begin to see this we will look at how all the prophets of the Old Testament represented the Word; and to do this I will use the example of the strange tasks God gave most all the prophets to perform.

The job of the prophets was to speak the truth to the people, and they were given to do this from the divine. They were also instructed to perform odd and irreligious actions (that are often little understood) that represented the life state of the people in relation to the church and the Word. Here are some examples of the things they were instructed to do: Isaiah was commanded to take the sackcloth below his waist off and the sandals off his feet and go naked and barefoot for three years as a sign and a wonder (Isaiah 20:2, 3). Ezekiel was commanded to represent the state of the church by making travel bags, moving to another place before the eyes of the children of Israel, taking out his bags from time to time, going out in the evening through a hole in the wall, and covering his face so he could not see the ground. In this way he would be a wonder to the house of Israel. He was told to say, “Behold, I am your wonder. As I have done, so it will be for you” (Ezekiel 12:3-7, 11). Hosea the prophet was commanded to represent the church’s condition by marrying a prostitute, which he did. She bore him three sons, one of whom he called Jezreel, the second No Mercy, and the third Not My People, which is a not very sublte commentary on the profane nature of the people in relation to the the divine word. At another point he was commanded to go love a woman who already had a lover and who was committing adultery, and buy her for himself (Hosea 1:2-9; 3:1, 2).

In the Bible Ezekial is told:

By doing these actions Ezekial was not bearing or taking on the sins of Israel as is often literally interpreted, but he was making visible the truth of their attitude toward God. As we discussed above no-one can remove the sins of another person, not even God does this, for it violates the sacred nature of freedom. (Swedenborg states that even God follows his own laws of divine order.) It was necessary for the prophets and Ezekail to do these things for the sake of correspondences; they revealed and represented the truth of the peoples state in the sight of God. The Lord does not deal in avoidance as humans do. The worst thing that can happen is that evil is covered over and unseen, for if it can not be seen it can not be removed. As much as possible the Lord providentially provides that evil not be completely hidden from sight. This is part of why the Lord allows terrible events in the world, such as 911. When these things happen the grief, anger, and heroic events that come about greatly deepen people’s relationship with God. People have to see evil to cooperate in changing their part in it.

Jesus was the ultimate prophet, and more than any other He embodied Israels treatment of the Word. He was betrayed, falsely arrested and beaten. He was spit on and whipped, mocked and forced to carry the cross with a crown of thorns on his head. He was crucified, buried, and then rose again in three days. All of these things are life history, and are also according to correspondence. Even in this darkest of time the truth was revealed through Jesus for it is inherent that that which comes from the Divine will be seen, bowed to, and eventually prevail. The existence of the Word (the Bible) eternally testifies to this for as we see in the Bible part of the message of each prophet is to severly reveal the disobedience of Israel. Jesus soul is divine and his body is human, and the divine possesses infinite wisdom, fully present in the moment to all of the past and all of the future. When Jesus spoke He spoke in correspondences; His words and actions have eternal meaning; it could not be otherwise than what He spoke would come to be for the divine is the essential of all things. As the Bible says every ‘Jot and tittle’ that he spoke would come into existence in all particulars, and it did so within the slow process of the natural world.

Now let us look at the correspondences in John the Baptist. In the quote above ‘wilderness’ represents the bereft spiritual state of mankind, and John is the voice crying out to the people to reach them with new light. Also, Since John represents the Lord as to the Divine Word the items of his wild physical appearance and actions can be understood as a description of the way the earth connects to heaven. (Understanding these things provides a profound key to the Bible). Crying out in the wilderness is the action of a great prophet passionately exposing the danger the people are in. John laments the state of his people toward the Word and the divine, and he appealed to the hearts of people. He did his job with fierce determination; he called the leaders ‘vipers’, and he taught the people to open their hearts to Him who was coming. These actions corresponds to the action of angels in heaven when they perceive the tragedy of a dying church.

To cry with a loud voice to Him who sat on the cloud symbolizes a supplication by angels in heaven to the Lord, because they lacked anything corresponding to them on earth. For the church on earth is to the angelic heaven like the foundation on which a house rests, or like the feet on which a person stands and which he uses to walk. When the church on earth has been destroyed, therefore, the angels lament and supplicate the Lord. Their supplication is that He may bring the church to an end and raise up a new one (AR 645).

John enacted this supplication on earth. The Bible further describes John the Baptist:

And the same John had his raiment of camel’s hair, and a leathern girdle about his loins; and his meat was locusts and wild honey. Then went out to him Jerusalem, and all Judea, and all the region round about Jordan, And were baptized of him in Jordan, confessing their sins. But when he saw many of the Pharisees and Sadducees come to his baptism, he said unto them, O generation of vipers, who hath warned you to flee from the wrath to come? (Mat 3: 4-7).

In general the clothing of the prophet corresponds to the external or literal sense of the Word. Also by food is signified spiritual nourishment from the knowledges of truth from the Word. In heaven these meanings of clothing and food are realities. Because these things are heavenly truths, by correspondence, they appear in the Word. The clothes on a person in heaven exist from the love and character in the soul of that person. The food they take corresponds to knowledge and truth that nourishes their use and love. Swedenborg writes that John’s “girdle denotes a bond which gathers up and holds together interior things; that ‘leather’ denotes what is external; and thus ‘a leathern girdle’ denotes an external bond; that ‘hairs’ denote ultimate or most general truths; that ‘a camel’ denotes memory-knowledge in general; that ‘a locust’ denotes nourishing truth in the extremes; and that ‘honey’ denotes the pleasantness thereof”. That John’s belt represents the bond between external and internal things, or heaven and earth, is a most profound reflection of his use, since he was re-establishing the connection between earthly life and heavenly wisdom. This was part of his role of making this union a solid reality on earth.

Because John represented the Word as to the Lord, when Jesus Himself came on the scene (who is the living Word), John said of himself that he was “not Elias, nor the prophet,” and that he was “not worthy to loose the latchet of the Lord’s shoe”. This is because when the real thing shows up the external expression fades away, just as a shadow goes away when the sun comes out.

The representative nature of the Jewish church was dead, and beginning to be replaced by John’s actions. The nature of the new church is that direct influx is received from the Lord by all human beings; every individual now has an immediate, personal relationship with the Lord – if they choose. Representation involved an intermediate step; this was abolished. The difference between the Old Testament church and the New Church will now be brought to light.

Newer ‘The Baby Will Know’, Incorporating Wholeness in the Soul: Interpretation of the Movie ‘Starman’
Back to list
Older The Spiritual Psychology in the Word ‘Remains’ from the Bible