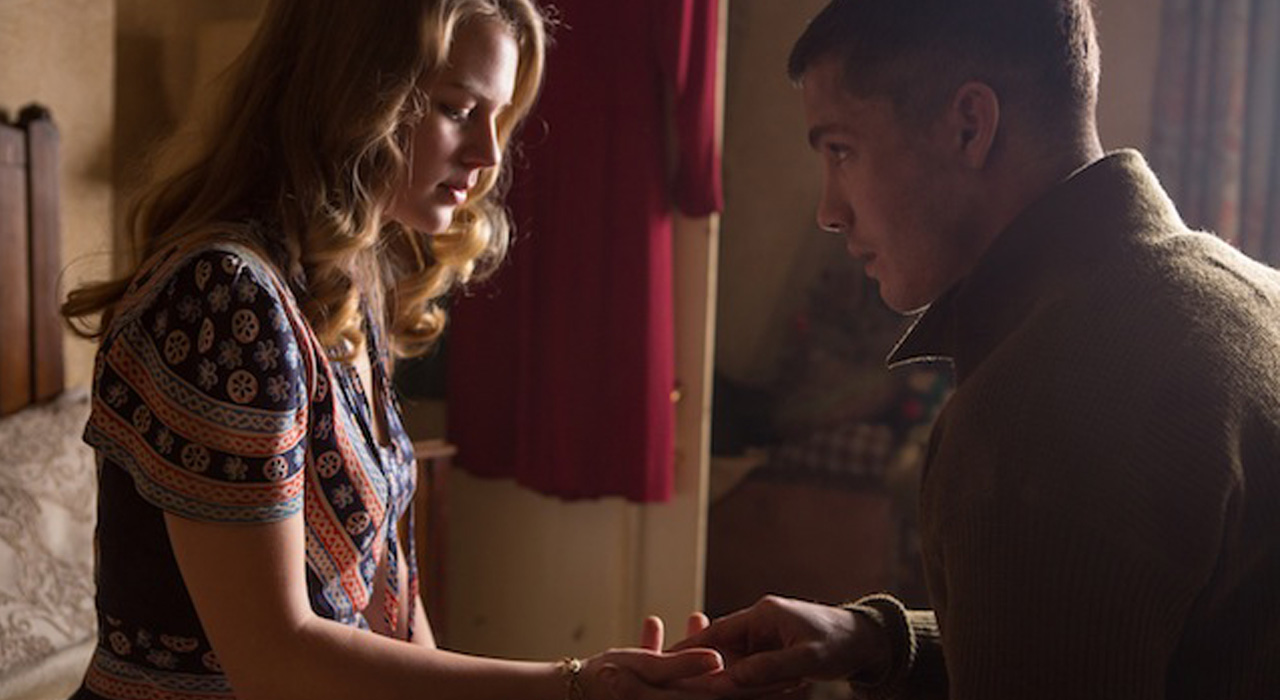 In the movie Fury the scene in which War Daddy and Norman enter the home of the two women there is an incredible tension: in first viewing I found it baffling as to what it meant.

Everything in war is intensified and brings out the core of people’s feelings. The extreme pressures of war doesn’t allow for facades. I think the key to the scene with the two German women is that all of the Fury team are extremely attached to War daddy as a father figure.

In the room with the women War daddy sees that Norman and the young women can be a pair, at least in that place in time. He himself seems to be looking for some peace, clean up, and have a meal.

In a short amount of time War Daddy gives Norman the best and most meaningful experiences of his life. Earlier on Norman fails to shoot a young soldier he sees sneaking up and that subsequently kills an officer in the tank in front of him. War Daddy smacks him around, telling him he is responsible for this death, but doesn’t give up on him. In a following scene he forces him to learn to kill. In despair Norman screams at War daddy, “just kill me”. He is pushed to his limit, but survives, and Gordo later tells him that he and his mates won’t fight for anyone else but War Daddy. Norman learns to be a good gunner.

In the room with the women War Daddy gets Norman laid. After he and the girl sing at the piano he tells Norman to take the girl in the room, “Or I will”. Norman experiences love and doesn’t want to leave, but they are suddenly called to a mission, and then moments later she is killed by in-coming artillery. In a short amount of time Norman finds his strength as a man among men – he experiences new love, and then the depth of despair at seeing her dead. Grady, who has been very hard on him from feeling jealous and lesser-than tears him away from her dead body and says, “Who are you Jesus Christ! are you going to resurrect her? Get the fuck in the tank!”. Norman punches at him, and they wrestle. Grady, as he holds him in a head lock yells, “That’s war! Can you feel it! That’s war!” – and pushes him back to the tank for the next mission.

In the room after Norman has had sex with the girl, and the older woman has prepared a meal of eggs (that War daddy had in his pack), the three others come into the room. They are extremely disruptive and stare with smoldering resentment at Wardaddy. Grady acts-out very aggressively. They are men, and they do their job very well, even heroically, but they are also like children, and what is remarkable is that in the intensity of their situation there is no hiding their feelings. War daddy tolerates Gordo telling gruesome stories, and tolerates Grady rebelliously taunting Norman and the girl, licking the girl’s egg and throwing it back at her, slapping at Norman, but when he threatens to take the girl and fuck her, he says, “Anyone takes that girl I will kick his teeth in”. They react but obey.

At least twice in the movie Wardaddy has to go away from the rest and quickly, intensely grieve on his own where no-one can see him; then comes back in his strength. An instance of this is in the beginning of the movie after his gunner has been killed and return to camp, he gets away from the others lets out his emotion. Also after he forces Norman to kill he goes away and kneels alone and grieves in anguish. It seems he can’t let his men see, so that they will have total faith in his strength. He promised that he would keep them alive, and he lives by that. War daddy has a deep moral compass even though he has to do very savage things. The whole movie depicts the condensed, transformative experiences born from the very extreme job they have as soldiers. When they come together after a triumph their matto is “best job I ever had”. War daddy says, “I love this tank, this is my home”.

In the end they are confronted with facing a very large SS battalion with an broken tank. All the others assume that they will hide in the brush, and let the battalion pass, but Wardaddy says he is going to fight, saying, “we are the rock to break that wave”. By standing against this army they will protect hundreds of soldiers coming in on a train. They fight it, but one by one the team comes to his side. It is almost certain death. In the end Wardaddy doesn’t keep them alive but he follows his conviction to do what is right for theirs soul as men and soldiers. They love him and believe in him as a leader. Wardaddy sees and acts in the moment, a great man of action, and spiritual and practical sight. He leads his men in ‘devotion to mission’ and to sacrifice for others.

In the tank the movie makes great use of scripture. After they have prepared for the last battle and are waiting in the tank they all drink from the same bottle and Boyd ‘Bible’ Swan recites a scripture that comes to him; he says, “He sat on His thrown and said, who shall I send, and I said, send me”. By their looks one sees they all recognize in their own way they are standing up for the will of the Lord, in the sense that Jesus said: “There is no greater love than to sacrifice your life for another”. When boyd made his speech Wardaddy replies, “Isaiah Chapter 6”; Boyd is amazed and delighted that he knows.