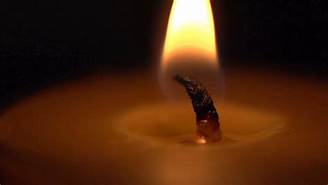 A candle symbolizes Christ, specifically his self-giving love and the gifts of life we receive from Him. The candle provides light and warmth as it consumes its own substance, the wax. The wax and wick work in symbiosis, in other words, form a union that sustains a flame when lit. They work in symbiosis, (though in a simpler way), like the heart and lungs work together in inion to sustain every cell of the body with nutrients. The wax and wick work in union to sustain a flame. In its own small way the candle is a reflection of the sun. In the sun there is a union between gravity and nuclear fusion for these cause the form of the sun. Nuclear fusion is ignited in the core of the sun by the immense pressure of gravity caused by the immense mass of the sun. In turn nuclear fusion expands against the gravity while consuming the mass of the sun and creates light and heat.

So too, Jesus gives of his own substance – He merged his body and soul into perfect union and thus glorified His body so that light was exponentially more available to man. And this light is the source of never ending in-filling love. He ‘drew all things unto himself’. And, when we are regenerated, and thus have light in ourselves, we give light to each other.

In the candle the wick, usually braided cotton, burns and produces a flame. When the wick is lit a chain of events begins. Wax, which is present on and near the wick, begins to melt. At that point, the wick absorbs the liquid wax (which has just melted) and pulls it upwards (due to capillary action). The heat of the flame vaporizes the fuel (molten wax), which in turn combines with oxygen in the air (combustion) to produce a constant flame.

A candle uses heat to produce light. In order to do that, it makes use of a process called combustion, which is basically the burning of a substance in the presence of oxygen, and produces heat and light. Here, the fuel is wax, which is composed of complex carbon compounds. Wax burns in the presence of oxygen to produce carbon dioxide gas, which is colorless. The smoke that you see is because wax never burns in a completely clean way.

This process in a candle is a simple example of a universal principle. The pulling-in and wicking-up, or capillary action, of the wax as fuel is an example of the universal principle that everything has its beginning from outermost parts, and these outer parts provide for and moves toward the essential inner action; meaning, in all brith and manifestation,  the external parts are first made and the internal parts are made from it. For instance, in the embryo in the womb the beginning of the arterial system is in the skin, not the heart. This may seem surprising, but it is illustrated by the similar and well-known fact that the beginnings of the woody fibres of trees are in the leaves, not the stem or the roots. Through the pith and the delicate fibres of the bark, nourishment ascends to the first tender leaves, and from these descends the first woody fibres that provide the build-up between the bark and the pith, (the leaves also provide the fibres that build the roots. Through these woody and cortical fibres sap afterwards ascends to the leaves, and new buds and leaves are formed, which in turn send down other fibres, and thus the trunk of the tree grows in concentric layers of wood – every fibre of which has descended from the leaves. In a similar way, the materials and strands of the nervous system, the beginnings of blood vessels, and the tissues of the organs are produced in the skin, and are sustained and reproduced from tissues of the skin. The process of membranes being produced in the ‘ultimates of the body, and especially from the skin’ comes from a universal principle that operates throughout life.

A similar process took place in Jesus, though of much larger scope. The process that took place in Christ is the universal master-key for all processes. It humbles us to contemplate the magnitude of what Jesus did, but things like the candle help us to see it.  It is ultimately incomprehensible to understand Jesus’s process because he is infinite and we are finite – but that is no reason not to seek – it just means there is no end to what we can seek, and come to understand. The whole reason He was born here was to make himself accessible and known, so that He could redeem and regenerate our soul.

Jesus in His life on earth, day by day, moment by moment, ‘consumed’ the hereditary evil in His body. His hereditary evil was in the body only, which is of the external part of the self. His internal was divine because from the Father and thus contained no evil, but divine good and truth. Because He was born on earth, Like all humans, He had hereditary evil from His mother who was human. By ‘consumed the hereditary evil’, I mean He removed the evil out of Himself by overcoming each and every temptation that confronted Him, or that tried to seduce Him. He could be drawn in to temptation because He had hereditary evil in His body, but by addressing and overcoming each and every one – even to the last on the cross – He made his human body divine! In this process He carried the whole of humanity with Him in an internal way. Humanity had lost its connection to God by becoming almost completely external in its religion and so spiritually had atrophied. People don’t understand that this was a very real disconnect in the psyche and soul of man, a disconnect of the avenues that can bond us to heaven and God. Jesus rebuilt these avenues of connection in the psyche of mankind by doing it in himself in a body, on earth, among us; by loving all humanity, by teaching people, and by establishing the new church.

Just as the union of the wax and wick sustain a flame that can light a room, the union of Jesus body and soul produces light and heat that sustains the whole of the universe and all mankind. Light and heat  produced from a candle brings light and warmth to people in a room. In Jesus, from the Holy marriage of His divine body and soul proceeds, as from a fountain, the Holy fire that created and sustains all of life. Unlike a candle, or anything else that exists, God is uncreated. Like a candle Jesus was born on the material earth – the divine one had to overcome the inertia of this world, and He did. Jesus made His body divine in the resurrection – and took it up into heaven. Jesus is in the midst of the spiritual sun above heaven from which proceeds wisdom (light) and love (heat), and these are life, the very spiritual substance of all life, and that perpetually sustains life.

How and Why What Happens In This Life is of Total Consequence to the Afterlife: The Internal Meaning of 'He that is unjust, let him be unjust still, and he that is holy, let him be holy still' (Revelation)

The Heart of 80 million Patriots are Broken By a Few Evil Overlords. What Happens When Evil Wins? Keep the Faith, God Providence Is In America