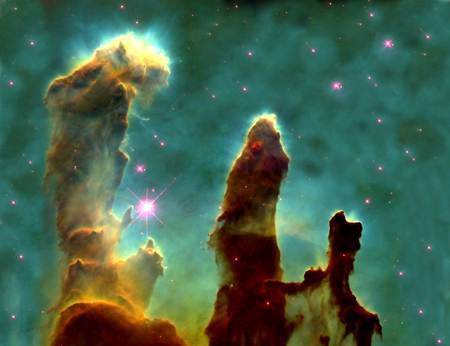 Unbeknown to pure science there are universal spiritual principles that we can also rely on and help us to see the direction of study. In this regard our guiding principle is this: there is an innate force in all things in the universe to seek the human form. The universe itself, if one were able to see it in its whole, is in the form of the perfect human. (See the articles in this blog that discuss in detail how it is that the human form is a universal form in the universe). It is vital to perceive this truth to get a tangible sense of what follows. I have been showing throughout this series of essays how there is an innate force that originates from influx from heaven and is received within all created things, and that it is this force that drives all things to manifest in and serve – some to a remote degree and some to a high degree – the human form. The mineral kingdom is the lowest degree, the plant kingdom is the mid degree, and the animal degree the highest degree. Above that is human consciousness and then God. This innate inclination in all things living and not living to seek, produce and serve the human form is essential in explaining the mysteries of the universe.

Scientists show that dark matter does not interact with light, heat, or radiation, but it does interact with gravity. They say that dark matter is the creative force that causes the universe to construct; they see that it is the force that built the magnificent universe we see now. Dark matter has positive gravity and brings things together, and Dark energy has repulsive gravity and drives things apart and is destructive, and the two are in constant battle. (In this essay we will concentrate on Dark matter and in the next on dark energy). Scientists describe dark matter as the influence or force that caused matter to first clump together or coalesce, which regular matter could not do on its own, thus from the discovery of science we can only conclude that this force contains an inner knowledge that guides the formation of stars, galaxies, the structure of the cosmic web, and thus the whole of the universe. Scientist say that Dark matter gravitationally moves into forms and regular matter follows. Dark matter orchestrates the movement of regular matter similar to the way dew adheres to a spider web. Where does this intelligence in Dark matter come from and how does it transfer into the natural world?

In the previous essay we identified several meta leaps in the development of the universe. Now we shall observe the great Meta-leap that science is missing. The effects scientist see from call dark matter are the result of what is called ‘conatus’. This is a term Swedenborg coined. Conatus is a sphere (sphere as in ‘effect of influence’, or ‘spiritual atmosphere’) that proceeds from the one spiritual sun and sustains all the spiritual world, and in turn the natural world; (in the midst of this one sun is God). Spheres contain the intelligence and the energy that direct the manifesting of all the unending fruitfulness and variety in the universe. Because it operates from the spiritual to the natural it works by correspondences, which we shall explain further in a moment. Ultimately, it is this Conatus that compels the shaping of all things in the universe to be part of, and to serve the universal human. The end purpose of creation is to populate heaven (the Lord’s kingdom) with angels, and all angels are former humans from (an) earth in the human form, and, as said before, the whole of heaven is in the shape and relational structure of the human form. If we know the end purpose of something, then we are able to better understand the means of getting there and how all the specific operation of the means work. Conatus is the means to this end purpose in which there are innumerable specific functions just as there are in the human body. It is a universal principle that which is the end purpose is served by all things that exist in some way or another; so all things that exist, even if in a peripheral way, are part of and serve the human form.

“The progression of the creation of the universe was from its First (which is the Lord encircled by the sun) to outmosts which are lands (matter)…” (DLW 314). “It should be known that (in forming) this image of creation the heat, light, and atmospheres of the natural sun and its world contribute nothing whatever. It is only the heat, light, and atmospheres of the sun of the spiritual world that do this, bringing that image with them, and clothing it with the forms of uses of the vegetable kingdom. The heat, light, and atmospheres of the natural world simply open the seeds, keep their products in a state of expansion, and clothe them with the matters that give them fixedness. And this is done not by any forces from their own sun (which viewed in themselves are null), but by forces from the spiritual sun, by which the natural forces are unceasingly impelled to these services”. (DLW 315).

Scientist admit they call dark matter dark matter because they are in the dark as to what it is and its cause, and because it doesn’t interact with light, but they know it is the essential force in creating the universe. Scientist describe the phenomenon very much the same as Swedenborg does, that is, they say dark matter is the architect of the universe; that it has gravity that causes regular matter (the natural world we know) to take its forms, i.e. dark matter ‘clothes itself’ in regular matter. Just as scientist say about dark matter, Swedenborg describes conatus as not being affected by heat and light at all. Scientist say regular matter is ‘just along for the ride’. Specifically, the telling characteristics of dark matter are that it does not interact with light, and that it is not affected by heat or radiation – but science declares that it does interact with gravity. (As you may recall from the last essay we described how in the early universe regular matter could not clump because there was such a blaze of heat and radiation, but dark matter could clump because it doesn’t interact with these. It is the clumping of dark matter’s gravity that caused regular matter to clump). By standing outside the influences of light, radiation, and heat dark matter is able to direct regular matter matter without obstruction. But its obstruction comes from dark energy (which we will discuss in the next essay). Swedenborg further describes Canotus in the following way:

Conatus does nothing of itself, but acts through forces corresponding to it, thereby producing motion; consequently that conatus is the all in forces, and through forces is the all in motion; and since motion is the outmost degree of conatus, through motion conatus exerts its power… For conatus is not force, nor is force motion, but force is produced by conatus, because force is conatus made active, and through force motion is produced; consequently there is no power in conatus alone, nor in force alone, but in motion, which is their product.

This quote is a challenge to understand without a lot of experience in reading Swedenborg, and we will not mine all its meaning here, but it introduces important principles in how conatus and and dark matter function. Any given entity that exists has these three factors, the root of which can be expressed as cause, effect, and end purpose; for instance, in the sun there is gravity (cause), nuclear fusion (effect), and the resulting equilibrium between the two which creates the body and use of the sun (end purpose). For now the first and foremost thing to take from the above quote is that conatus, force, and motion, act as one; they have distinct operations, but cannot exist or operate without each other, similar to the way the heart and lungs have distinct operations but cannot function without each other, nor can either exist unless in the body they serve, the life of the body being the end purpose. In this scenario conatus/dark matter is the unseen cause, the movement of regular matter is the effect, and the use they serve in the from created is the end purpose.

The second important thing to take from the above quote is that conatus, force, and motion communicate to each other by correspondences. This means that they are distinct in themselves, and each is at a different level or degree, but they function as one for the same purpose. Now to make this as tangible understandable as I can lets look at how these levels operate in something we all know – the human body. (It is important to me in communicating these ideas to the reader as tangibly understandable as I can). We can understand conatus by thinking of the affections  we feel in our body, and also that we feel from others. In the human body canotus is the will; for the will is the love and affections that are the first cause of all our actions. The effect is in all the innumerable components in the body and the mind that are the means, and the end purpose is the meaningful actions of our whole self.

A human being is a whole entity, a body, that is in the micro of the form of God. The will in a person is living conatus. The conatus in the natural world is non-living conatus, but the two correspond, so the dynamics of living conatus reveal the dynamics that take place in the non-living universe; and this is what science observes as dark energy and its role in the building of stars, galaxies, and the cosmic web.