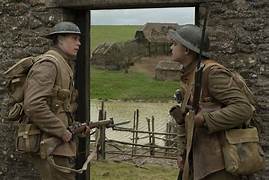 The Movie 1917: Continuous Action in the Moment, And the Experience and Perception of God’s Providence

I saw the movie ‘1917’. Loved it. It uses a continues camera shooting technique. There are no scene cuts. This technique in concert with the intense unpredictable action, where the soldiers could die at any given moment -creates, I think, a heightened perception of God’s providence guiding their life. In the moment they can’t see it. In the moment they are doing everything they can to fight, stay alive, and to do what is right. The cumulative effect of seeing them make decisions, take action, deal with the results, make decisions, take action, and deal with it over again looks like a condensed allegory of life, in which God is with us at each step. What good soldiers have to do is amazing. It appears, from what I have observed, that a soldier has a mission, and part of the mission is to fight and kill any enemy they encounter in its course. There are times where it seems they could have gone around and avoided the enemy, but then that sniper or ground soldier would be there to take out the next man. So, they do their duty and have the courage to take them on. In ‘Saving Private Ryan’ the band of men encounter a high caliber machine gun bunker, one of the soldiers says ‘lets go around it’, but the captain says ‘We found it he’s our problem’, and they make a coordinated charge. In ‘Fury’ there is a scene where three inferior American tanks encounter a superior German tank. One of the tank leaders implores the captain to avoid it, but the captain says, ‘he is our problem’. In each case they have an important mission, but don’t run from the fight they encounter. I don’t think this is necessarily a universal strategy, but it seems to be part of being a good soldier, and it takes incredible courage. The soldiers in ‘1917’ move from one hard, near death situation to another. At first the main character tries to talk his partner into a more cautious approach, but then he has to be the one to take on all challenges to complete the mission. When you risk death at every turn, and turn to the unknown at every corner, to move forward, it feels that there must be trust in God to face it. This impression is increased by the way they don’t question their last decision but deal with the consequences immediately before them. It is also increased by the way they try and do what is right even in the midst of killing, including, (at least the character in this movie do), having mercy to the enemy. In the movie they pull a German soldier out of a crashed and burning plane, and that soldier ends up killing one of them. The main character also appeals to a young German soldier not to fight from mercy, but the soldier does and the main character kills the German soldier. Even in the face of death they have an instinct to do what is right – which suggests there is an innate trust in God’s presence and promise. Thus the perception of God’s providence over-watching the action is effected.