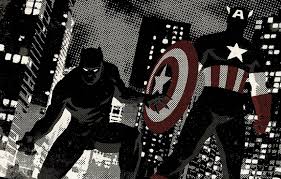 Black Panther is a great and very entertaining movie. It was reputed to be an anthem for the black community, and I think it is in a good way. As such, it was generally expected it would be on the liberal side, but it upholds at least some important Trump-like politics surprisingly well.

In Wakanda, the policy was to keep their society and technology a secret from the world. Near the beginning the young King is discussing his partner’s interest in helping refugees with the great prosperity and technology they posses in Wakanda. His friend says, “We can’t just let refugees in, if we do they will bring all their problems here and we will become less than ourself.”  In this discussion, and others, it is clear that they  believe in being strong within them self as a nation first, – before they reach out to help others. The parallel with America and Trump here is clear. Such a policy has been held by The USA from the beginning, but it has long been frayed away by corrupt leaders. America has been giving itself away for many years to the point of its own peril. In the last year, of course, Trump has made the policy ‘America First’ ubiquitous in the world, and has been very successful at it. What he has done in fighting and defeating intrenched corruption that was on its way to making ‘America mediocre’ has been an incredible development in the USA and the world. It is great that the movie pics up and upholds this important point of leadership.

In the movie the Black Panther’s partner has been on a mission to help the disadvantaged in Africa, and perhaps around the world. Near the end the new king emphasizes that their approach to their new out-reach to the world will be that they will not try to change people and their traditions, but will focus on using their power for good by getting rid of the evil doers in the world. this is exactly the foreign policy that Trump articulated in his State of the union speech; and that he has executed with great success in the world. I believe it is very much the right approach politically and spiritually. Even if one is imposing something good on other peoples, it is still imposing and people have to come to these kind of beliefs from within. The irony is that by taking the approach Trump now is I believe the people of the world will move toward democracy and capitalism on their own. We see this tendency and desire around the world; such as in China, Venezuela, now in Iran (nearly 6 of 10 countries are now democracies in the world now). It is innate within people to want to be free, to own think for them self, to own businesses to have the chance to dream, create and make a better life.

The bad guy in the movie is powerful and talented but a corrupt, and cruel man and leader. He was a victim in life, but in seeking to be King he is only seeking power and revenge against the powers that be. The story shows his pain at his fathers death, and his abandonment from his people. When his dead father visits him in a  vision his father says to him, “Do you have no tears for me?”, and the boys says no – meaning his Trauma is unresolved. As a powerful man he acts out of his own deep, unresolved trauma; to him others are simply pons in his psycho-drama. In the movie He is called a divider, while Black panther is the greater uniter for good. There is  powerful spiritual and social message that the left would probably characterize as conservative but its really just a good thing for the black community. They are saying, “Don’t live by the past, but be proud in who we are, and our ability to work with all people and be better than most in giving of our talents. Victimhood and leveraging oppression is a dead end”. This is a great message that gets away from the victim and oppressed mentality that bad leaders have used on the black community for years.

The new King speaks his political vision for Wakanda to the UN at the end of the movie; He sees Wakanda as a light to the world. As allegory Trump is Black Panther, and Wakanda is America. Trump has brought pride and confidence back to America politically, very much as Captain America did in the hearts of many Americans; Cap is the great symbol of the greatest generation and their values. Black Panther is the Captain America for Blacks. Reginald Hudlin, a black scriptwriter in Hollywood, wrote a celebrated re-imaging of the Black Panther in the mid-2000s.  In “Who is the Black Panther?” He wrote:

The Black Panther is the Black Captain America. He’s the embodiment of the ideals of a people. As Americans, we feel good when we read Captain America because he reminds us of the potential of how good America can be, if, of course, we have the convictions to live by the principles the country was founded on. As a black person, the Black Panther should present the fulfillment of the potential of the Motherland.

After all, he’s a Wakandan. Wakandans are so bad@ss THEY’VE NEVER BEEN CONQUERED. Not only does Wakanda’s independence block the total dominance of Africa by colonial powers, its cultural evolution has gone unchecked for centuries. They were ahead of us a thousand years ago. And no one has colonized them, burned their books, erased their language, or broken their spirits.

Wakanda breaks out of its shell and becomes a leader in the world as America has done for many years.

There is another interesting political point in the movie which I think is very wise and originates from the wisdom of the Word. Blank Panther’s father, who was killed in the last movie and is now in the spiritual world, tells Black Panther in a vision that he is a good man; and that it is hard for a good man to be a good leader. The meaning of the story in the Bible of the ‘unjust steward’ is that those who are in evil have a much greater zeal for power; they do not have as much of a conscience and do all the things needed to get that power. Those who are good do not have this hard edge for power and dominance. (This scripture is explained in greater depth in the article in this blog called ‘The Good American Zealot”. Trump is the rare gem that has a huge heart of America and the people and he is a savvy zealot in handling power.