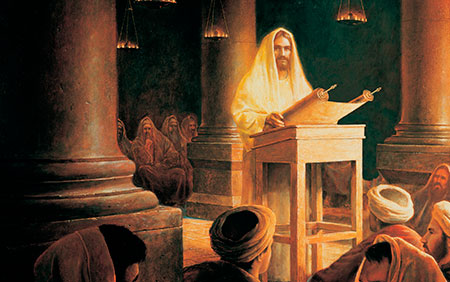 By
Steve Sanchez
0 Comments
0
802 Views
THE PROFOUND PROCESS BY WHICH JESUS MERGED WITH DIVINE TRUTH IN THE GLORIFICATION
In the Glorification process there are two parallel processes by which Jesus Glorified His human body. This is a description of How Jesus became Divine Truth in the Glorification Process. (I previously did a post on the process of how Jesus made Himself divine love in the Glorification; please read that also). (There is much to it but I will explicate it as concisely as I can).
This process is very significant to understand for it gives a profound key to understanding what is happening in the Gospels.
Jesus became divine truth by fulfilling all prophecy written about Him in the Bible. When Jesus declares in the synagogue the words, ‘This day the scriptures are fulfilled’, we realize that He is the fulfillment of the prophesies about the Messiah. It is an extraordinary moment that is the culmination of centuries of prophecy and preparation throughout the Old Testament. The Word is divine truth in the Bible from God; and, Jesus is divine truth embodied, and in the process of the Glorification they came into convergence and ultimately perfect union.
Divine truth originates from the Holy soul of the Lord in heaven; there, it is in its internal purity. Divine truth in the Bible was accommodated down to earth to humans by degrees; this means it has a higher spiritual form in heaven and a natural form on earth. It manifests on earth in the form of the published Bible through revelation given to the prophets and disciples. In the Bible of the Old Testament it is prophesied (over 300 times in one way or another) that the Messiah will come and He will accomplish deeds that will redeem and save all humanity. (These prophecies are divine truth for what comes from the will of God is by nature divine and eternal). The Lord came into the world and throughout His life lived all that was prophesied about him; He consciously initiated this Himself when he announced that ‘Today the scriptures are fulfilled’. He fulfilled and embodied divine truth from beginning to end, and thus fully became the whole of divine truth. He did this by fulfilling each and every prophecy to the last one, which took place on the cross. This is why He is the LIVING Word; He lived it, He embodied it, and He became it. This is not a metaphor, but a historical accomplishment that was centuries and centuries in the making. It is a work that only the divine Human could perform. For as said, what the divine will professes always comes into being, no matter how long it may be.
Divine truth is totally complete and immutable in its awareness, and this truth has to established in both the natural and spiritual worlds to be whole. The natural is the foundation of the spiritual and neither can subsist without the other. God foresaw that the state of religion and charity would decline to such a degree that if He did not come all humanity would be lost in abysmal darkness. So God put forth divine truth in the prophecies of the Old Testament from His divine forethought many many centuries before He would incarnate.
We can gain an understand of how Jesus became divine truth by embodying them from a truth we have all heard in common language: ‘A man becomes what they does’. We become what we believe, will, and do. This is because our soul is composed of our will and understanding. When we are stripped away of all the externals, as we will be when we die, we are left with what we really love and believe, and this is what forms our internal soul. Jesus fulfilled all the prophecies by performing them and living them in the world, such as – healing the sick, performing miracles, teaching the multitudes, receiving baptism; and being crucified and resurrecting – therefore, He is the One and became the whole of divine truth!
Here is another important way to look at this: by being born in the natural world of earth Jesus had an external and internal self as do all humans who are born. By progressively fulfilling all prophecy in the Word to the end, He brought the external (His body) and His internal (His soul) into perfect union, known as the Holy marriage between His divine essence and human. In the resurrection there was no more separation, but the Holy Union! His physical body became divine, for that which merges with the divine is divine, and there is only one divine. When you break metal in two, and then weld it back together, the weld becomes the strongest part. His presence and power were upgraded by the crucible of the glorification process exponentially. He became what He did, and what He did in his life is fulfill the prophecies. Praise God!