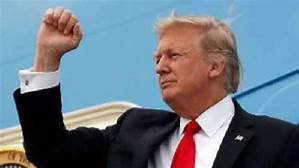 Trump is Balls to the Walls Bad-Ass: He Is Strategically Working Every Angle for Good to Win In America and the World.

Trump is balls to the walls bad ass like non before. He did a great thing by immediately building up the military when he first became president, and now has all the leverage for doing good in the world and protecting it. We can now see how important building a supreme military was. The dems wanted Baghdad to be Benghazi, they wanted it to be a messy failure so they could trash Trump. (In saying this they are tacitly acknowledging that Benghazi was a treasonous disaster). But Trump acted immediately and with strength. Dems could say nothing but make up misrepresentations. The democrats cannot be trusted, especially on foreign policy. They would let Americans die rather than do the right thing, purely to make Trump look bad. DT has outmaneuvered all enemies from inside and outside from the beginning. His warnings and his threats have great meaning, while his enemies, that is, the democrats and terrorists around the world, have very little. He is restrained until the line is crossed, then there is devastating consequences.
The dems misrepresent the problem with Iran by saying Trump wants to go to war. He is not going to War; he has Iran in a very controlled arm-bar. He is strategically crippling them with sanctions, and surgical strikes, but only at the right time when they cross the line. At some point they will have to see they can’t win and will police themself.
In similar, but unique ways, according to the problem they present, Trump has worked to put himself in a position to negotiate from strength with all countries. At the same time he has been uniquely great at developing goodwill with many world leaders.
In addition, America is now in a very strong position to become energy independent in the near future; which is a huge change Trump orchestrated. We became the leading producers of crude oil recently, and have been for petroleum and natural gas for some time. No one can hold that over us, which was a problem before. We are also now very strong on steel and manufacturing. Companies are not leaving but coming back because taxes and tariffs are now more fair.
Along with increasing our sense of optimism, patriotism, and trust in leadership Trump has America in a very strong position to be safe and prosper long into the future.

In Praise of Jesus: Principles of His Love and Wisdom, and How It Is that He Achieved the Inconceivable