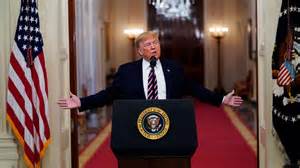 Trump’s Great Acquittal Speech: How His Center of Gravity Is Transforming the GOP, America, and the World

Very inspiring watching Trump’s wonderful acquittal speech. He went off script and called it a celebration. You can see the ‘gravity’ of his presence in the room. Everyone around him respects him, and are getting stronger in their own right, and they see he is the center of the gravity – he is the leader, the heart and soul. It is his genius that initiated the movement and makes it work. In the room there are a lot of very smart, ambitious men and women for their own careers, but they are coming together in a way we have never seen the GOP do. Most of the leaders, probably hundreds of them now, would run through a brick wall for Trump! He masterfully cultivates this loyalty for the good of all because he knows a unity of talented people is very powerful. Trump just went through a series of intense attacks from the left for three years. He was the center of the attack, and he stood up to the injustice, and has surprised and inspired everyone. The full fury of the deep states irrational hatred is focused on taking him down. Trump described the dems in a very interesting way. He said, ‘all you people here are geniuses but the dems are geniuses too. They stick together like glue. They took a completely false accusation and rode it all the way to the brink of impeachment. They are good at what they do. They are totally crazy and wrong but good at it” (my paraphrase). This way of saying it inspires intense desire to fight, and to win.
In his speech Trump also focuses on commending several leaders, one by one, for being great warriors. He described how they fought for him ‘as if it their lives were at stake’ (trump’s words); and how they also had to take a lot of heat. Trump didn’t want it to be this way, he said it wasn’t what he signed up for, especially for his family, but week after week he stood up to it and kept winning. He did it for all the right reasons – God, country and neighbor, and I think the people in that room learned a whole new level about doing their job for the right reason. They all went through a crucible experience together that created a deep love and bond, like people who have been in military battles together. The stakes were super high.
At one point in his speech Trump gives high praise to his legal team and tells a little story. He tells how his lawyers told him, ‘We are in the right here and the law is all in our favor’, and Trump said to them, ‘It doesn’t matter, I know I did nothing wrong, but they are going to use every trick in the book to win’. Pelosi, shitty and their crew are like terrorists, except intellectual terrorists. They don’t have a conscience like us, they will lie, twist and deceive to any end they can get away with in order to win. It’s a terrible double standard, but for our own integrity it is important conservatives do not stoop to the the ways of the dem leaders.
The effect of all this is, I believe, that the GOP has been purged of a great amount of corruption. God works to not let evil go unseen for then it cannot be removed. The experience of seeing and fighting all this lying and cheating makes one loath it, and not want to be like it; I think it has formed a conviction in the kind of leaders many in the GOP want to be. Not only are they inspired by Trump’s example of being an honest, transparent fighter for the people, but the left has shown they will attack and investigate for the slightest reason, or no reason. Trump ‘joked’: ‘I have to watch out I don’t jay-walk or they will try to impeach’. This effect is by no good intent of the left, but it is the reality. The left also, who feel very entitled to corruption, will think twice now before gettin caught lining their pockets. They will have to cut back, because their methods and pattern of corruption has been greatly exposed by GOP fighters.
As Trump said in his speech the left’s intention was to inflict pain on people to get their way. All this makes me think of God’s providence at work. God uses the evil as much or more as he uses the good to effect change. The pain the left inflicted cuts deep and causes an abhorrence of evil and a determination to fight it and not be that way. Only God can orchestrate all this. He guides us to see and do what we can not do and see on our own. He does so for the sake of our repentance, and so we learn in our stubborn heart to put him first. I think it’s true that someone like Trump has the foresight to give evil enough rope to hang themselves, but nothing like what God does. We learn from the inspiration of having a great economy and a new vision of God in America, and from the abhorrence of seeing the sickening level of corruption that is among us.
With God hope springs eternal (even for California). Trump’s ability to get results and articulate a vision full of hope is magnificent. As he says, we just might have to endure more winning that we can stand.

Here is the speech – https://www.youtube.com/watch?v=j-4mZbhnrms&fbclid=IwAR2uqfmLBEXAz_QA5oXRtaAkRIJt-7YwXaFKalW2eg6icUxQOEZ0GQknZ5A

Jesus, The Inner Teacher: The One Who Works The Transformation of Our Soul