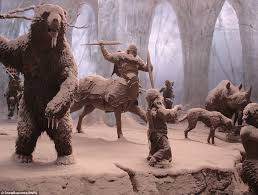 What the Great Theme of the Release of the Captives Means in the Bible and How it is Unconsciously Portrayed in Movies and Stories, Particularly By C. S. Lewis

The major Biblical theme of the Captives is repeated in movies and goes mostly unnoticed, at least as a Biblical theme, yet it is repeated over and over. Because it is unnoticed as a Biblical theme it is more likely that is unconsciously told. This theme is a manifestation of the profound inner need to find redemption, especially from the trauma of injustice and being made blind to the truth of what is happening. In the matrix, we see that the basis of the story is that humans have been captured by the machines and they are being used as energy pods, and this has gone on for centuries. They are only released when Neo frees them all by defeating the evil agents and the machines. In the Bible this theme takes place at the flood, the incarnation, and at the second coming. At each of these times evil forces have over accumulated on earth and have over run the first level of heaven, and by so doing have trapped many of the good and innocent in their ‘suedo-heavens’. The Lord by his might and judgement, in different ways comes and frees them. Scripture refers to this when it speaks of how Christ descended to the hells and freed all the good people trapped there by the evil forces. This situation is also described by the parable of the wheat and the chaff. The meaning of this parable is that the good people (wheat) who have been trapped by the evil (chaff) must stay in the psuedo-heaven the evil have created until Christ comes to set all things right. We replay this theme in movies, because it is an archetype of trauma and redemption in the human psyche that comes from the divine truth in the Bible. Christ came when He did for the purpose of overcoming the immense forces of evil which had accumulated on earth. These forces threatened to consume humankind in darkness forever. In his life the Lord was continuously victorious against all temptations and attacks on him from evil forces, and by so doing he subjugated all the hells. These battles and victories of the Lord are spoken of by the prophets and the in the New Testament, especially Isaiah, the Psalms, and in Revelation
The theme of releasing those who have become captives of the evil is in many great movies, often in more than one way. We see it in ‘The Lord of the Rings’ when Aregone dares to venture into the land of the dead where all the ghost figures are trapped by a curse in a cave. Aragon seeks to recruit them to join their great dire battle. When Aregorn demonstrated his kingly courage to the cursed throng and its leader, the cursed realize they can redeem their life by fighting with him. They fight well for him and are released from the dark cave and regain their full human nature.
We also see this theme in C. S. Lewis great story, ‘The Lion, the Witch and the Wardrobe’. In this story the witch turns people, and talking animals, into stone. In her huge ice mansion she has hundreds of talking animals and creatures that she has turned to stone. As the Narnians defeat the queen’s army in a great battle, Aslan comes and breaths on the statues which are then released from their trapped state and rejoice in being reunited with their people. In this movie the same theme is demonstrated by the fact that the whole land is released from perpetual snow caused by the evil queen for the last 100 years.
This theme comes into play in a major way in ‘The Silver Chair’ where the prince was captured and put under a spell by the green witch as were all the underground people that were her captive slaves. The captives is a major part of the story in many movies, such as the Alien movies where human beings are held in pods, kept alive for a time and used as energy and food. A similar theme takes place in ‘I-Robot’, and ‘Minority report’.